John Towner Williams (born February 8, 1932) is an American composer and conductor. He has composed many soundtracks for blockbuster movies such as Star Wars, Superman, Jaws, Indiana Jones, Jurassic Park, and Harry Potter.

William was born in Long Island, New York on February 8, 1932. He studied at the University of California, Los Angeles and at the Julliard School. His parents were Esther and Johnny Williams.

He is best known for his scores (soundtracks) for movies such as Jaws, Star Wars, Superman, E.T., Indiana Jones, Home Alone, Schindler's List, Jurassic Park, Harry Potter, and Lincoln. He conducted the Boston Pops Orchestra and the Chicago Symphony Orchestra and conducts for them a few times each year especially around Christmas time.

Williams has composed music for all but two of Steven Spielberg's movies (Duel and The Color Purple). 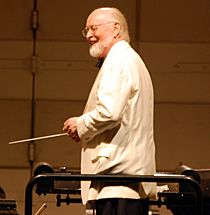 For Barack Obama's presidential inauguration on January 20, 2009, John Williams made a special arrangement of the Shaker hymn "Air and Simple Gifts". It was performed by four musicians: the violinist Itzhak Perlman, the cellist Yo-Yo Ma, the clarinetist Anthony McGill and the pianist Gabriela Montero.

Williams also created the theme music for four Olympic Games, NBC Sunday Night Football, the NBC Nightly News, the Statue of Liberty's rededication, the television series Lost in Space and Land of the Giants, and the original, not as well known calypso-based theme song to Gilligan's Island.

In 2016, Williams composed the score for Spielberg's The BFG, which opened in July 2016.

In 2017, Williams scored the animated short film Dear Basketball, directed by Glen Keane and based on a poem by Kobe Bryant. He also wrote the music for Star Wars: The Last Jedi, the eighth episode of the saga, and Steven Spielberg's drama film The Post, both of which opened in December 2017.

In March 2018, Williams announced that following Star Wars: The Rise of Skywalker, which was released in December 2019, he would retire from composing music for the Star Wars.

In June 2019, The New York Times Magazine listed Williams as one of hundreds of artists whose material was destroyed in the 2008 Universal fire.

Williams is attached to score the fifth Indiana Jones film.

Williams was married to actress Barbara Ruick from 1956 until her death from a cerebral hemorrhage in 1974. They had three children: Jennifer, Joseph and Mark. In 1980, he married Samantha Winslow. They live in Los Angeles, California. 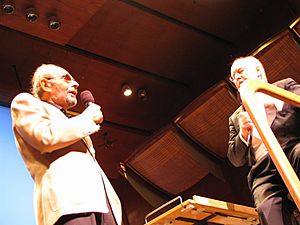 Williams is an honorary member of Kappa Kappa Psi, the national fraternity for college band members. Williams was inducted into the Hollywood Bowl Hall of Fame in 2000, and was a recipient of the Kennedy Center Honors in 2004.

In 2020, Williams won the Grammy Award for "Best Instrumental Composition" for composing Star Wars: Galaxy’s Edge Symphonic Suite, and he received his 52nd Oscar nomination for "Best Original Score" at the 92nd Academy Awards for Star Wars: The Rise of Skywalker.

In 2018 the performing rights organization Broadcast Music, Inc. established The John Williams Award, of which Williams became the first recipient.

In 2020 Williams received the Gold Medal of the Royal Philharmonic Society as well as the Princess of Asturias Award for the Arts (jointly with Ennio Morricone).

All content from Kiddle encyclopedia articles (including the article images and facts) can be freely used under Attribution-ShareAlike license, unless stated otherwise. Cite this article:
John Williams Facts for Kids. Kiddle Encyclopedia.