William Oliver Stone (born September 15, 1946) is an American movie director, producer, writer and actor. He was born in New York City and raised in Manhattan and Stamford, Connecticut.

Stone won an Academy Award for Best Adapted Screenplay as writer of Midnight Express (1978). He also wrote the acclaimed gangster movie Scarface (1983). Stone achieved prominence as director/writer of the war drama Platoon (1986), for which he won the Academy Award for Best Director and the film received Best Picture. Platoon was the first in a trilogy of films based on the Vietnam War, in which Stone served as an infantry soldier. He continued the series with Born on the Fourth of July (1989)—for which Stone won his second Best Director Oscar—and Heaven & Earth (1993). Stone's other notable works include the Salvadoran Civil War-based drama Salvador (1986); the financial drama Wall Street (1987) and its 2010 sequel Money Never Sleeps; the Jim Morrison biographical film The Doors (1991); the satirical black comedy crime film Natural Born Killers (1994); and a trilogy of films based on the American Presidency—JFK (1991), Nixon (1995) and W. (2008). His latest film is Snowden (2016).

He was in the war as an infantry soldier. Stone's movies are often about political and cultural issues. 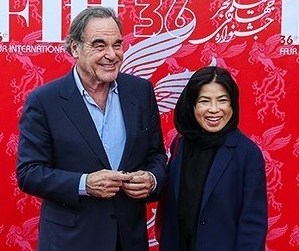 Stone has been married three times, first to Najwa Sarkis on May 22, 1971. They divorced in 1977. He then married Elizabeth Burkit Cox, an assistant in film production, on June 7, 1981. They had two sons, Sean Stone/Ali (b. 1984) and Michael Jack (b. 1991). Sean appeared in some of his father's films while a child. Sean Stone currently works for the Russia state media company Russia Today. Oliver and Elizabeth divorced in 1993. Stone is currently married to Sun-jung Jung from South Korea, and the couple have a daughter, Tara (b. 1995). Stone and Sun-jung live in Los Angeles.

All content from Kiddle encyclopedia articles (including the article images and facts) can be freely used under Attribution-ShareAlike license, unless stated otherwise. Cite this article:
Oliver Stone Facts for Kids. Kiddle Encyclopedia.