Gordon-Levitt also founded the online production company hitRECord in 2004 and has hosted his own TV series, HitRecord on TV, since January 2014, winning the Primetime Emmy Award for Outstanding Creative Achievement in Interactive Media - Social TV Experience in the same year. In 2013, Gordon-Levitt made his feature film directing and screenwriting debut with Don Jon, in which he also stars. He previously directed and edited two short films, both of which were released in 2010: Morgan M. Morgansen's Date with Destiny and Morgan and Destiny's Eleventeenth Date: The Zeppelin Zoo.

Joseph Leonard Gordon-Levitt was born in Los Angeles, California. He was raised in the Sherman Oaks neighborhood of Los Angeles. He is Jewish. Gordon-Levitt's father, Dennis Levitt, was once the news director for the Pacifica Radio station, KPFK-FM. His mother, Jane Gordon, ran for the United States Congress in California during the 1970s for the Peace and Freedom Party. 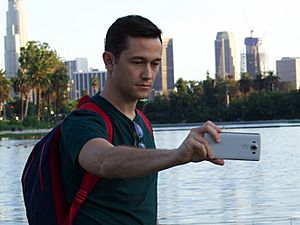 His maternal grandfather, Michael Gordon (1909–1993), was a Hollywood film director. Gordon-Levitt had an older brother, Dan, a photographer and fire spinner who died in 2010 at the age of 36. Gordon-Levitt attended Van Nuys High School and graduated in 1999. He took a break from acting to study at Columbia University, but dropped out in 2004 to pursue acting again.

Gordon-Levitt joined a musical theater group at the age of four and played the Scarecrow in a production of The Wizard of Oz. At age six, he starred in several made-for-television films. As a child, Gordon-Levitt appeared in many films. Subsequently, he was approached by an agent and began appearing on television and in commercials for Sunny Jim peanut butter, Cocoa Puffs, Pop-Tarts, and Kinney Shoes.

In December 2014, Gordon-Levitt married Tasha McCauley. Their first child, a son, was born in August 2015. Their second son was born in June 2017.

All content from Kiddle encyclopedia articles (including the article images and facts) can be freely used under Attribution-ShareAlike license, unless stated otherwise. Cite this article:
Joseph Gordon-Levitt Facts for Kids. Kiddle Encyclopedia.