Sherman Oaks is a neighborhood in the San Fernando Valley region of Los Angeles, California, founded in 1927 with boundary changes afterward. The neighborhood includes a portion of the Santa Monica Mountains, which gives Sherman Oaks a lower population density than some other areas in Los Angeles.

A partner of the Los Angeles Suburban Homes Company, Gen. Moses Hazeltine Sherman, developed Sherman Oaks. The company had subdivided 1,000 acres (400 ha) of land that would become Sherman Oaks. In 1927 each acre was sold for $780. Sherman's other major venture was the Los Angeles Pacific Railroad.

In 1991, a group of homeowners living in the Chandler Estates area successfully petitioned former Los Angeles City Councilmember Zev Yaroslavsky to re-draw the boundaries of Sherman Oaks from Magnolia to Burbank Blvd to the north, and from Coldwater Canyon to Van Nuys Blvd to the west, with the goal of including their neighborhood. This request was not anything new to the San Fernando Valley; other neighborhoods had either sought to change their names, or sought to attach themselves onto more affluent neighborhoods to escape from what they saw as growing urban blight and the collapse of their social status. Residents in the area argued, however, that the area was originally part of Sherman Oaks, but was labeled Van Nuys instead through the creation of ZIP codes in 1962; some residents were able to produce a few property deeds to present their case.

Just a few weeks after the Chandler Estates area successfully seceded from Van Nuys, Magnolia Woods, a 45 block area bordered by Van Nuys Boulevard on the east and the San Diego Freeway on the west, and between Burbank and Magnolia Boulevards, also successfully petitioned Los Angeles City council member Marvin Braude to secede from Van Nuys and join Sherman Oaks. Petitioners in the area argued that their neighborhood was also part of Sherman Oaks, though they were only able to produce 22 deeds showing so. As a result of this change, Van Nuys Middle School became separated from its namesake neighborhood.

Finally, in 2009, the Los Angeles City council voted to redraw neighborhood boundaries again to allow an area of about 1,800 homes in Van Nuys to be included. This proposal attracted criticism from locals.

The 1994 Northridge earthquake caused damages in the surrounding area. The Community Redevelopment Agency sought to manage the rebuilding efforts. The homeowners in the Sherman Oaks area later won a lawsuit to prevent the agency from managing efforts. 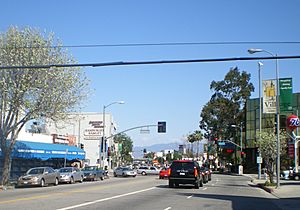 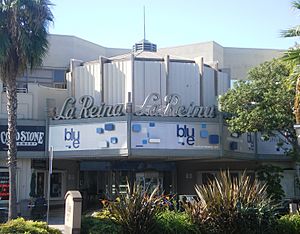 La Reina Theatre, although closed, still stands on Ventura Boulevard. Parts of the space have been converted for retail use.

As of the 2010 census, according to the San Fernando Valley Almanac, Sherman Oaks had a population of 52,677 people and 25,255 households. The racial makeup of the neighborhood was 82% non-Hispanic white, 5% Asian American and 3% African American; 11% were Hispanic or Latino of any race. Other races made up less than 1%.

The Los Angeles Times reported that the 2000 U.S. census counted 61,166 residents in the 9.15-square-mile Sherman Oaks neighborhood, including a wide swath of the Santa Monica Mountains—or 6,687 people per square mile, among the lowest population densities for the city. In 2008, the city estimated that the resident population had increased to 65,436.

The neighborhood was considered "not especially diverse" ethnically within Los Angeles, with a high percentage of white residents. The breakdown was whites, 73.8%; Latinos, 11.8%; Asians, 5.7%; blacks, 4.4%; and others, 4.4%. Iran (14,1%) and Mexico (8.8%) were the most common places of birth for the 26.2% of the residents who were born abroad—an average percentage for Los Angeles.

All content from Kiddle encyclopedia articles (including the article images and facts) can be freely used under Attribution-ShareAlike license, unless stated otherwise. Cite this article:
Sherman Oaks, Los Angeles Facts for Kids. Kiddle Encyclopedia.