Kids Encyclopedia Facts
This page is about the 90210 area of Los Angeles. For the historic 20th-century post office building in Beverly Hills itself, see Beverly Hills Main Post Office. 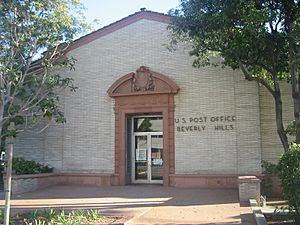 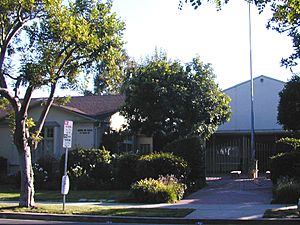 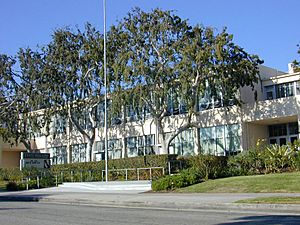 The identification of the section with Beverly Hills did not begin until the 1960s. "When Beverly Hills was incorporated in 1914, the northern border was roughly a mile north of Sunset Boulevard, with the exception of Trousdale Estates. The remaining section stretching north to Mulholland Drive was left as part of the hills of Los Angeles, where it remained anonymous for decades." In 1963 the area was included within the 90210 ZIP Code, which also covers the northern part of Beverly Hills.

As citizens of the city of Los Angeles, BHPO residents receive Los Angeles city services and vote in Los Angeles elections. This can cause problems with emergency response. For example, when actress Demi Moore needed an ambulance in January 2012, Beverly Hills and Los Angeles 9-1-1 operators used over two minutes to determine jurisdiction for her home.

All residents are zoned to Emerson Middle School and University High School.

All content from Kiddle encyclopedia articles (including the article images and facts) can be freely used under Attribution-ShareAlike license, unless stated otherwise. Cite this article:
Beverly Hills Post Office Facts for Kids. Kiddle Encyclopedia.