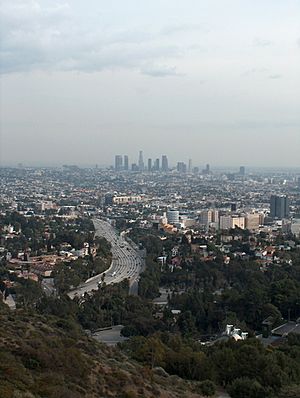 Mulholland Drive is a street and road in the eastern Santa Monica Mountains of Southern California. It is named after pioneering Los Angeles civil engineer William Mulholland. The western rural portion in Los Angeles and Ventura Counties is named Mulholland Highway. The road is featured in a significant number of movies, songs, and novels. David Lynch, who wrote and directed a film named after Mulholland Drive, has said that one can feel "the history of Hollywood" on it. Academy Award–winning actor Jack Nicholson has resided at Mulholland Drive for many years and still lives there today.

The main portion of the road, from Cahuenga Pass in Hollywood westward past Sepulveda Pass, was originally called Mulholland Highway and was opened in 1924. It was built by a consortium of developers investing in the Hollywood Hills. DeWitt Reaburn, the construction engineer responsible for the project, said while it was being built, "The Mulholland Highway is destined to be one of the heaviest traveled and one of the best known scenic roads in the United States."

Mulholland Drive has some of the most exclusive and expensive homes in the world, housing mainly Hollywood celebrities. 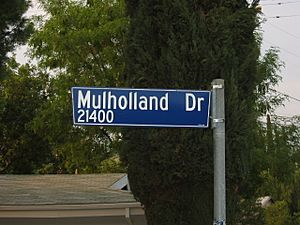 A Mulholland Drive street sign in a residential neighborhood in Woodland Hills.

The eastern terminus of Mulholland Drive is at its intersection with Cahuenga Boulevard at the Cahuenga Pass over the Santa Monica Mountains (at this point Cahuenga Boulevard runs parallel to Highway 101/The Hollywood Freeway). The road continues to the west, offering vistas of the Hollywood Sign, Downtown Los Angeles, and then Burbank, Universal City, and the rest of the San Fernando Valley with the San Gabriel, Verdugo, and Santa Susana Mountains.

The road winds along the top of the mountains until a few miles west of the San Diego/Interstate 405 Freeway. Just west of the intersection with Encino Hills Drive, it becomes an unpaved road not open to motor vehicles. This part is known by many as "Dirt Mulholland". This portion connects with other unpaved roads and bike trails and allows access to a decommissioned Project Nike command post that is now a Cold War memorial park.

The road opens again east of Topanga Canyon Boulevard (State Route 27) at Santa Maria Road but remains dirt until it reaches Saltillo Street. Shortly thereafter, the thoroughfare splits into Mulholland Drive and Mulholland Highway. Mulholland Drive terminates at U.S. Highway 101 (the Ventura Freeway), where it becomes Valley Circle Boulevard. Mulholland Highway continues to the southwest until it terminates at State Route 1 (PCH) in Leo Carrillo State Park at the Pacific Ocean coast and the border of Los Angeles and Ventura counties.

All content from Kiddle encyclopedia articles (including the article images and facts) can be freely used under Attribution-ShareAlike license, unless stated otherwise. Cite this article:
Mulholland Drive Facts for Kids. Kiddle Encyclopedia.