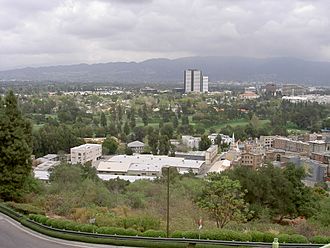 View across Universal City, with Burbank studio district in background

Universal City is an unincorporated area within the San Fernando Valley region of Los Angeles County, California, United States. Approximately 415 acres (1.7 km²) within and around the surrounding area is the property of Universal Studios, one of the six major film studios in the United States: about 70 percent of the studio's property is inside this unincorporated area, while the remaining 30 percent is within the Los Angeles city limits. This 70 percent portion of the property remains unincorporated to avoid the City of Los Angeles' business taxes and regulations (the community has a building permit office on site in order to simplify the building process).

Carl Laemmle (/lɛmliː/ lem-lee) officially opened the Second Universal City (Lankershim Boulevard) on March 15, 1915, on the 230-acre (93 ha) Taylor Ranch property. At the launch event, in what is now the North Hollywood area, a crowd of men and women, dressed in the attire of the era, eagerly awaited the display of the film stages, daredevil stunt pilots and silent film idols, as well as the movie cameras Laemmle had brought along. "See how slapstick comedies are made. See your favorite screen stars do their work. See how we make the people laugh or cry or sit on the edge of their chairs the world over!" stated a poster touting Universal's opening. "C'mon out! Aw, c'mon!"

Universal Pictures' founder was a German immigrant who opened his first nickelodeon in Chicago in 1906. He moved to New York City, where he soon joined with half a dozen small motion picture companies to create the movie company he called Universal Pictures.

In 1912, Laemmle briefly operated three small studios - Bison, Nestor, and Oak Crest Ranch. After a court battle with New York Motion Picture Company, control of the Bison lot was returned to the New York Motion Picture Company. The court allowed Carl Laemmle to retain use of the name "Bison" as "Bison 101" for his westerns, which were filmed on the Oak Crest property in the San Fernando Valley. The Oak Crest Ranch is where Laemmle filmed the western At Old Fort Dearborn. The Providencia Land and Water company, called "Oak Crest Ranch" in the trade papers, became the first Universal City location.

In 1913, Laemmle decided to consolidate the Nestor studio (Hollywood) and Oak Crest ranch (Providencia) property. His first Universal City was too small, so he ordered a search for a new and larger property in the valley, a location with more space to use for his Universal City. Laemmle leased Providencia ranchland in the San Fernando Valley in 1912. If it was a city, it was a haphazard one (Motion Picture World): with the help of nearly 300 movie hands and actors, Laemmle erected makeshift buildings, set up cameras and began churning out hundreds of one- and two-reel silent westerns.

Other studio chiefs laughed, calling the place "Laemmle's Folly" and jeering that it was so far out of town that Laemmle could film scenery for free anywhere he wanted. Laemmle himself had second thoughts and worried that maybe he had made a huge mistake. But he was to soon live his greatest dreams. Success was found all around with his "city" containing streets, bungalows, sets and viewing stands – all so the public could observe the magic of moviemaking.

In the meantime, Laemmle added a zoo to the Oak Crest Ranch (Moving Picture World ad 1913) – which was open to visitors to generate free advertising by word of mouth. The Rotarians of Los Angeles were one of the groups permitted to visit the Oak Crest - Universal City. (The Rotarian - Feb 1914)

The Oak Crest ranch being too small (Scrap-it) for his larger Universal City, Laemmle bought the Lankershim Land and Water property, the 230-acre (0.93 km2) Taylor Ranch for $165,000, calling it his "New Universal City".

In 1914, operations at The Oak Ranch (Providencia Ranch) were moved to the Taylor (Lankershim) ranch. The Universal (Oak Crest) ranch zoo was moved to the Back Ranch of the Lankershim property. [Moving Picture World] The new Universal City was opened for Universal staff in 1914.

Laemmle went on an eight-day whistle-stop tour from Chicago to Los Angeles the week before Universal City's grand public opening. His promoters even sold the grand (and technically impossible) lie that Laemmle had persuaded the Secretary of the Navy to send a battleship up the Los Angeles River to fire a salvo on opening day. Easterners, they hoped, would believe anything they heard about California.

After World War I, Laemmle brought even more kin over from war-torn Europe, increasing the payroll to 70. His cheerful nepotism was immortalized in humorist Ogden Nash's couplet: Uncle Carl Laemmle has a very large faemmle. Carl Laemmle was responsible for creating the "star system" rather than just using anonymous actors in films.

Laemmle was forced to end studio tours in the 1920s, when talkies came along and "quiet on the set" became an absolute. He sold his sprawling entertainment empire in 1936. Before his death in 1939, at age 72, he helped bring more than 200 German-Jewish refugees to Los Angeles.

Universal City did not welcome tourists again until July 15, 1964, with the opening of the Universal Studios Hollywood theme park and its included Studio Tour. The next few decades saw the arrival of hotels, an amphitheater, and Universal CityWalk, a faux city street and popular destination for tourists and locals.

In 1915, Universal moved its operations at the Hollywood/Nestor studio and Universal/Nestor Ranch to its new Lankershim Blvd. location before the official opening of Universal City (Lankershim Blvd).

In 1916, the first Universal Oak Ranch became known as the Lasky Ranch. The Hollywood studio was then leased to Christie Comedies.

Carl Laemmle thought the Providencia ranch area was too small for his idea of "Universal City." He ordered the purchase of Lankershim land Water Company property. Universal City Moves to a new location, the Taylor Ranch

The mountain portions above 600 feet (180 m) were not incorporated into studio use until MCA/Universal's master plan to level the hills and create the Universal Studio Tour Center and City Walk.

Between 1914 and 1915 "Universal City" assets were moved to the Lankershim location. 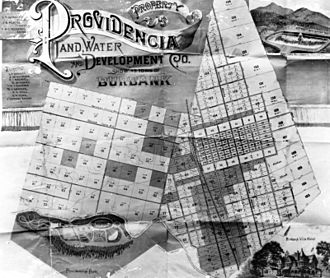 The Providencia Land and Water Development Company property was used as a location for some early films, most significantly the battle scenes in the silent classic about the American Civil War, The Birth of a Nation (1915).

In 1912, Carl Laemmle (IMP) Universal Pictures took over the assets of Nestor Studios and named this area Universal City. The photograph of this area can be seen in Los Angeles Library archives: "A Birds Eye View of Universal City":

More than a half-dozen major fires have impacted the Universal Studios property (and, accordingly, Universal City) during its history. See Universal City Studios for more information.

All content from Kiddle encyclopedia articles (including the article images and facts) can be freely used under Attribution-ShareAlike license, unless stated otherwise. Cite this article:
Universal City, California Facts for Kids. Kiddle Encyclopedia.