Woodland Hills is a neighborhood bordering the Santa Monica Mountains in the San Fernando Valley region of Los Angeles, California.

Woodland Hills is an affluent neighborhood in the southwestern region of the San Fernando Valley which is located east of Calabasas and west of Tarzana. On the north it is bordered by West Hills, Canoga Park, and Winnetka, and on the south by the Santa Monica mountains.

Some neighborhoods are in the foothills of the Santa Monica Mountains. Running east–west through the community are U.S. Route 101 (Ventura Freeway) and Ventura Boulevard, whose western terminus is at Valley Circle Boulevard in Woodland Hills.

The area was inhabited for approximately 8,000 years by Native Americans of the Fernandeño-Tataviam and Chumash-Venturaño tribes that lived in the Santa Monica Mountains and Simi Hills and close to the Arroyo Calabasas (Calabasas Creek) tributary of the Los Angeles River in present-day Woodland Hills. The first Europeans to enter the San Fernando Valley were the Portola Expedition in 1769, exploring 'Alta California' for Spanish missions and settlements locations. Seeing it from present-day Sepulveda Pass, the oak savanna inspired them to call the area El Valle de Santa Catalina de Bononia de Los Encinos (Valley of St. Catherine of Bononia of the Oaks). The Mission San Fernando Rey de España (Mission San Fernando) was established in 1797 and controlled the Valley's land, including future Woodland Hills.

Ownership of the southern half of the valley, south of present-day Roscoe Boulevard from Toluca Lake to Woodland Hills, by Americans began in the 1860s. First Isaac Lankershim (as the "San Fernando Farm Homestead Association") in 1869, then Isaac Lankershim's son, James Boon Lankershim, and Isaac Newton Van Nuys (as the "Los Angeles Farm & Milling Company") in 1873, and finally in the "biggest land transaction ever recorded in Los Angeles County" a syndicate led by Harry Chandler of the Los Angeles Times with Hobart Johnstone Whitley, Gen. Moses Sherman and others (as the Los Angeles Suburban Homes Company) in 1910.

Victor Girard Kleinberger bought 2,886 acres (1,168 ha) in the area from Chandler's group and founded the town of Girard in 1922. He sought to attract residents and businesses by developing an infrastructure, advertising in newspapers, and planting 120,000 trees. His 300 pepper trees formed a canopy over Canoga Ave. between Ventura Boulevard and Saltillo St. became Los Angeles Historic-Cultural Monument #93 in 1972. The community of Girard was eventually incorporated into Los Angeles, and in 1945 it became known as Woodland Hills.

Within the San Fernando Valley, Woodland Hills generally experiences some of the more extreme temperature changes season to season than other regions. During the summer, temperatures are often very hot, while during the winter, overnight temperatures are among the coldest of the region. On July 22, 2006, Woodland Hills recorded the highest temperature ever in Los Angeles County, hitting 119 °F (48 °C) at Pierce College. The climate is classified as a Csa in the Köppen climate classification, which is characterized by mild, rainy winters and hot, dry summers. This climate is often referred to as mediterranean. Precipitation in Woodland Hills averages much the same as most other regions of the west San Fernando Valley, although somewhat higher amounts of rainfall occur in the surrounding hills.

In 2008 the population of Woodland Hills was approximately 63,000. The median age in 2000 was 40, considered old when compared to other city and county jurisdictions.

The 2008 Los Angeles Times's "Mapping L.A." project supplied these Woodland Hills neighborhood statistics: population: 59,661; median household income: $93,720. The Times said the latter figure was "high for the city of Los Angeles and high for the county."

The Woodland Hills Recreation Center (Shoup Park) is a 19-acre (7.7 ha) park in Woodland Hills. The park has a small indoor gymnasium without weights and with a capacity of 300; it may be used as an auditorium. The park also has a lighted baseball diamond, outdoor lighted basketball courts, a children's play area, a lighted football field, picnic tables, a lighted soccer field, and lighted tennis courts. Woodland Hills Pool is an outdoor seasonal unheated swimming pool.

Along the western boundary of Woodland Hills is the large Upper Las Virgenes Canyon Open Space Preserve, a regional park with a trail network for miles of hiking, mountain biking, and equestrian rides. The trailhead and parking are at the very western end of Victory Boulevard in Woodland Hills. Scheduled walks and programs are offered. The Santa Monica Mountains National Recreation Area has various parks nearby to the south of the community. The Top of Topanga Overlook gives panoramic views of the verdant Woodland Hills neighborhoods and the Valley. 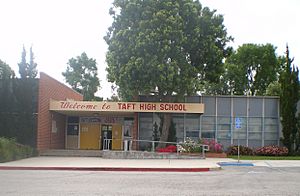 Public schools serving Woodland Hills are under the jurisdiction the Los Angeles Unified School District. Much of the area is within Board District 4.

Lycée International de Los Angeles had a Woodland Hills campus, which had over 140 students as of 2001. This was in a public school building, rented from the Los Angeles Unified School District. In 2001 LAUSD announced that it would not renew the lease.

Colleges and universities in Woodland Hills include:

The Motion Picture & Television Country House and Hospital, a private retirement, nursing care and acute-care hospital facility is reserved for industry professionals. The section includes some people who lived and/or died there, among other residents.

All content from Kiddle encyclopedia articles (including the article images and facts) can be freely used under Attribution-ShareAlike license, unless stated otherwise. Cite this article:
Woodland Hills, Los Angeles Facts for Kids. Kiddle Encyclopedia.