Winnetka (IPA: wɪˈnɛtkə) is a neighborhood in the west-central San Fernando Valley in the city of Los Angeles. It is a highly ethnically diverse area, both for the city and for Los Angeles County, with a relatively large percentage of Hispanic and Asian people.

Winnetka was founded in 1922 as a small farming community. As of 2018, there are six public and four private schools in the area, a recreation center, two pocket parks and a city-operated child-care center.

The 2000 U.S. census counted 40,943 residents in the 4.78-square-mile Winnetka neighborhood, or 9,286 people per square mile, about an average population density for the city. In 2008, the city estimated that the population had increased to 54,825. In 2000 the median age for residents was 32, considered average for city and county neighborhoods.

Winnetka is bounded on the north by Chatsworth, on the northeast by Northridge, on the east by Reseda, on the south by Woodland Hills and on the west by Canoga Park. 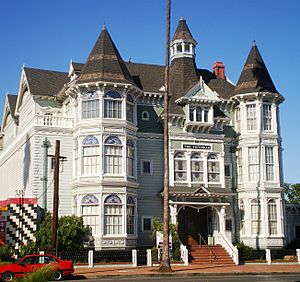 In 1920, the Los Angeles Chamber of Commerce requested that Charles Weeks come to the San Fernando Valley to establish a series of one-acre egg farms. The farms would be based on the successful formula Weeks developed in East Palo Alto, California. The "poultry colony" Weeks created in the Winnetka area of the valley eventually developed into a small farming community named Weeks Poultry Colony. Later Weeks renamed the colony Winnetka, after a farm he owned in Winnetka, Illinois.

A total of 21.9% of Winnetka residents aged 25 and older have earned a four-year degree, which is considered an average figure for both the city and the county. Schools located in the neighborhood are:

As of the 2010 census 76.5% of the population is a high school graduate or higher and 23.7% have a bachelor's degree or higher, both fall below the state average. Population of this statistic are 25 years and over.

All content from Kiddle encyclopedia articles (including the article images and facts) can be freely used under Attribution-ShareAlike license, unless stated otherwise. Cite this article:
Winnetka, Los Angeles Facts for Kids. Kiddle Encyclopedia.