Northridge is a neighborhood of Los Angeles, California in the San Fernando Valley. It is the home of California State University, Northridge, as well as eleven public and eight private schools.

Originally named Zelzah, the community was renamed North Los Angeles in 1929 to emphasize its closeness to the booming city. This created confusion with Los Angeles and North Hollywood. At the suggestion of a civic leader, the community was renamed Northridge in 1938. Northridge can trace its history back to the Gabrielino (or Tongva) people and to Spanish explorers. Its territory was later sold by the Mexican governor to Eulogio de Celis, whose heirs divided it for sale.

The area has been the home of notable people, and it has notable attractions and points of interest. Residents have access to a municipal recreation center and a public swimming pool.

The 2000 U.S. census counted 57,561 residents in the 9.47-square-mile Northridge neighborhood—or 6,080 people per square mile, among the lowest population densities for the city. In 2008, the city estimated that the population had increased to 61,993. In 2000 the median age for residents was 32, about average for city and county neighborhoods; the percentage of residents aged 19 to 34 was among the county's highest.

The median yearly household income in 2008 dollars was $67,906, considered high for the city. Renters occupied 46.4% of the housing stock, and house- or apartment-owners held 53.6%. The average household size of 2.7 people was considered average for Los Angeles. 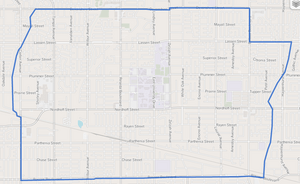 Northridge neighborhood as delineated by the Los Angeles Times

Northridge touches Porter Ranch and Granada Hills on the north, North Hills on the east, Van Nuys on the southeast, Lake Balboa and Reseda on the south and Winnetka and Chatsworth on the west.

The area now called Northridge was first inhabited about 2,000 years ago by the Native American Gabrielino (or Tongva) people. Totonga was their tribal village and where Northridge eventually became located. The Gabrielino-Tongva people, who lived in dome-shaped houses, are sometimes referred to as the "people of the earth." They spoke a Takic Uto-Aztecan (Shoshonean) language.

It wasn't until 1769 when the area known as Northridge was descriptively first reported by Father Juan Crespi, the prolific diarist who accompanied the exploration party of Spanish explorer Gaspar de Portolà on its arduous trek through California, including the Sepulveda Pass leading to the San Fernando Valley. Having traversed more than their share of dry and arid land, the discovery of water, wherever it was, merited rejoicing. And so it was with Zelzah, an unexpected oasis and one of the meeting places of the Gabrielino, native to the area. The explorers bathed and rested at the watering hole, fed by underground streams which still run deep beneath the intersection of Parthenia Street and Reseda Boulevard.

When American and naval military forces decided to occupy California in the late-1840s, representatives of the Mexican Governor Pio Pico broke with the tradition of "granting" land and, instead, sold it, without the usual area limitations to Eulogio de Celis, a native of Spain. By 1850, de Celis was listed in the Los Angeles Census as an agriculturist, 42 years old, and the owner of a real estate worth $20,000.

A few years later, the land was split up. The heirs of Eulogio de Celis sold the northernly half - 56,000 acres (230 km2) - to Senator George K. Porter, who had called it the "Valley of the Cumberland" and Senator Charles Maclay, who exclaimed: "This is the Garden of Eden." Porter was interested in ranching; Maclay in subdivision and colonization. Francis Marion ("Bud") Wright, an Iowa farm boy who migrated to California as a young man, became a ranch hand for Senator Porter and later co-developer of the 1,100-acre (4.5 km2) Hawk Ranch, which is now Northridge land.

In 1951, a local reporter reported that Northridge's population had reached 5,500 residents, an increase of 1,000 people from 1950. In addition, it was around this time that Reseda Boulevard had been paved at its full width and become the main business street of boulevard proportions. The need also arose for Northridge to accommodate the new population, so in 1954 the first middle school opened in the rapidly growing town. Northridge Junior High School, later known as Northridge Middle School, opened with 1,000 students who had been brought all the way from Fulton Middle School in Van Nuys.

The 1994 Northridge earthquake was named for Northridge based on early estimates of the location of the quake's epicenter; however, further refinements showed it to be technically in neighboring Reseda. The earthquake, which occurred on a blind thrust fault, was one of the strongest ground motions ever recorded in North America. Freeways collapsed, and many buildings suffered irreparable damages. Vertical and horizontal accelerations lifted structures off their foundations. During the 1994 quake, the Northridge Hospital Medical Center remained open and treated more than 1,000 patients who came to the facility during the first few days after the 6.7-magnitude quake.

This was the second time in 23 years that the area had been affected by a strong earthquake. On February 9, 1971 the San Fernando earthquake (also known as the Sylmar earthquake) struck, having a magnitude of 6.5.

Northridge Hospital Medical Center consists of a 411-bed hospital and serves 2 million residents of the Valley. The hospital is one of only two facilities in the Valley certified as a trauma center for treating life-threatening injuries.

The Recreation Center is located in Northridge. It has an indoor gymnasium, without weights, which may also be used as an auditorium. Its capacity is 400. Doc Green is the commissioner of the youth sports leagues at Northridge Recreation Center. The park also has barbecue pits, a lighted baseball diamond, lighted indoor basketball courts, lighted outdoor basketball courts, a children's play area, a community room, picnic tables, a lighted soccer field, and lighted tennis courts. The Northridge Pool, on the recreation center grounds, is an outdoor heated seasonal pool.

All content from Kiddle encyclopedia articles (including the article images and facts) can be freely used under Attribution-ShareAlike license, unless stated otherwise. Cite this article:
Northridge, Los Angeles Facts for Kids. Kiddle Encyclopedia.