Known as the California water wars, its construction was controversial from the start, as water diversions to Los Angeles eliminated the Owens Valley as a viable farming community. The continued operation has led to public debate, legislation, and court battles over the environmental impacts of the aqueduct on Mono Lake and other ecosystems.

The aqueduct project began in 1905 when the voters of Los Angeles approved a US$1.5 million bond for the 'purchase of lands and water and the inauguration of work on the aqueduct'. On June 12, 1907 a second bond was passed with a budget of US$24.5 million to fund construction.

Construction began in 1908 and was divided into eleven divisions and a cement plant. The number of men who were on the payroll the first year was 2,629 and this number peaked at 6,060 in May 1909. In 1910, employment dropped to 1,150 due to financial reasons but rebounded later in the year. Between 1911 and 1912 employment ranged from 2,800 to 3,800 workers. The number of laborers working on the aqueduct at its peak was 3,900. In 1913, the City of Los Angeles completed construction of the first Los Angeles Aqueduct.

The aqueduct as originally constructed consisted of six storage reservoirs and 215 mi (346 km) of conduit. Beginning 3.5 mi (5.6 km) north of Black Rock Springs, the aqueduct diverts the Owens River into an unlined canal to begin its 233 mi (375 km) journey south to the Lower San Fernando Reservoir. This reservoir was later renamed the Lower Van Norman Reservoir.

The aqueduct uses gravity alone to move the water and also uses the water to generate electricity, which makes it cost-efficient to operate. The aqueduct system has been operated safely throughout its history and is still in operation. 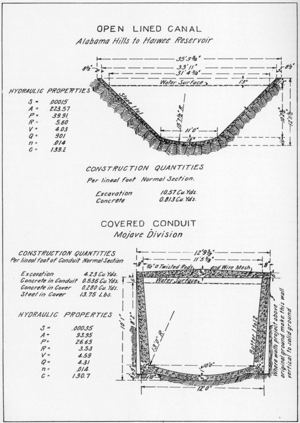 In an effort to find more water, the city of Los Angeles reached farther north. In 1930, Los Angeles voters passed a third US$38.8 million bond to buy land in the Mono Basin and fund the Mono Basin extension. The 105 mi (169 km) extension diverted flows from the Rush Creek, Lee Vining Creek, Walker and Parker Creeks that would have flowed into Mono Lake. The construction of the Mono extension consisted of an intake at Lee Vining Creek, the Lee Vining conduit to the Grant Reservoir on Rush Creek, which would have a capacity of 48,000 acre⋅ft (59,000,000 m3), the 12.7 mi (20.4 km) Mono Craters Tunnel to the Owens River and a second reservoir, later named Crowley Lake with a capacity of 183,465 acre⋅ft (226,301,000 m3) in Long Valley at the head of the Owens River Gorge.

Completed in 1940, diversions began in 1941. The Mono Extension has a design capacity of 400 cu ft/s (11,000 L/s) of flow to the aqueduct; however, the flow was limited to 123 cu ft/s (3,500 L/s) due to the limited downstream capacity of the Los Angeles Aqueduct. Full appropriation of the water could not be met until the second aqueduct was completed in 1970.

The Mono Extension's impact on Mono Basin and litigation

Between 1940 and 1970, water exports through the Mono Extension averaged 57,067 acre feet (70 million cubic meters) per year and peaked at 135,000 acre⋅ft (167 million m3) in 1974. Export licenses granted by the State Water Resources Control Board (SWRCB) in 1974 increased exports to 167,000 acre⋅ft (206 million m3) per year. These export levels severely impacted the region's fish habitat, lake level and air quality, which led to a series of lawsuits. The results of the litigation culminated with a SWRCB Decision to restore fishery protection (stream) flows to specified minimums, and raise Mono Lake to 6,391 feet (1,948 m) above sea level. The agreement limited further exports from the Mono Basin to 10,000 acre⋅ft (12.3 million m3) per year.

In 1956, the State Department of Water Resources reported that Los Angeles was only exporting 320,000 acre feet (390 million cubic metres) of water of the 590,000 acre⋅ft (730 million m3) available in the Owens Valley and Mono Basin. Three years later, the State Water Rights Board warned Los Angeles that they could lose rights to the water they were permitted for but not appropriating. 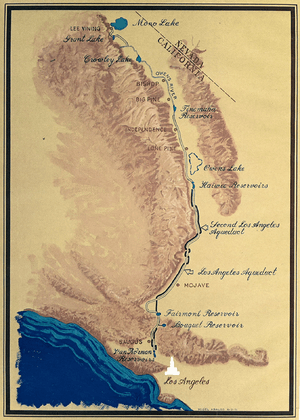 Faced with the possible loss of future water supply, Los Angeles began the five-year construction of the aqueduct in 1965 at a cost US$89 million. Once the city received diversion permits, water exports jumped in 1970, adding 110,000 AF that year into the aqueduct system. By 1974, exports climbed to 450,000 acre⋅ft (560 million m3) per year.

The 137-mile-long (220 km) aqueduct was designed to flow 290 cu ft/s (8,200 L/s) and begins at the Merritt Diversion Structure at the junction of the North and South Haiwee Reservoirs, south of Owens Lake, and runs roughly parallel to the first aqueduct. Water flows entirely by gravity from an elevation of 3,760 feet (1,150 m) at the Haiwee Reservoir through two power drops to an elevation of 1,200 ft (370 m) at the Upper Van Norman Reservoir.

The Second Aqueduct was not built as a single contiguous conduit. For design and construction purposes the aqueduct was divided into Northern and Southern sections and the two are connected by the San Francisquito Tunnels, which are part of the First Aqueduct.

The Northern Section carries water starting at the North Haiwee Reservoir through the Haiwee Bypass passing around the South Haiwee Reservoir. The flow then continues 115 miles (185 km) south through a series of pressure pipelines and concrete conduits where it connects up with the First Aqueduct at the North Portal of the Elizabeth Tunnel near the Fairmont Reservoir.

The San Francisquito Tunnels (which includes the Elizabeth Tunnel) has a flow capacity of 1,000 cu ft/s (28,000 L/s) and is large enough to handle the flow of both aqueducts. Once the combined flow reaches the penstocks above Power Plant #2, water is diverted into the Southern Section of the second aqueduct away through the Drinkwater Tunnel to the Drinkwater Reservoir. 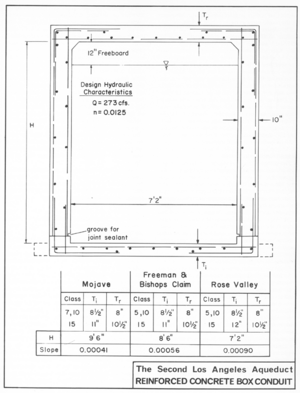 An updated version of the concrete box construction used on the second aqueduct.

The last segment of pipe, known as the Saugus Pipeline, carries water south past Bouquet Canyon, Soledad Canyon and Placerita Canyon. From there it roughly parallels Sierra Highway before it enters Magazine Canyon towards the Terminal structure and Cascades. Water from the Terminal structure can then flow to either the Cascade or penstock to the Foothill Power Plant and into the Upper Van Norman Reservoir.

In addition to the construction in the Northern and Southern sections, improvements were also made to the lined canal between the Alabama Gates and the North Haiwee Reservoir in the Northern Section that consisted of adding 24 in (610 mm) sidewalls to both sides of the canal and the raising of overcrosses. This work increased the capacity of the lined canal from 710 cu ft/s (20,000 L/s) to 900 cu ft/s (25,000 L/s) cfs.

The second aqueduct's impact on the water system

The increased flows provided by the second aqueduct lasted only from 1971 through 1988. In 1974 the environmental consequences of the higher exports were first being recognized in the Mono Basin and Owens Valley. This was followed by a series of court ordered restrictions imposed on water exports, which resulted in Los Angeles losing water. In 2005, the Los Angeles Urban Water Management Report reported that 40–50% of the aqueduct's historical supply is now devoted to ecological resources in Mono and Inyo counties.

Influence on Los Angeles and the county

Between 1909 and 1928, the city of Los Angeles grew from 61 square miles to 440 square miles. This was due largely to the aqueduct, and the city's charter was worded such that it stated the City of Los Angeles could not sell or provide surplus water to any area outside the city. Outlying areas relied on wells and creeks for water and, as they dried up, the people in those areas realized that if they were going to be able to continue irrigating their farms and provide themselves domestic water, they would have to annex themselves to the City of Los Angeles.

Growth was so rapid that it appeared as if the city of Los Angeles would eventually assume the size of the entire county. William Mulholland continued adding capacity to the aqueduct, building the St. Francis Dam that would impound the waters creating the San Francisquito Reservoir, filed for additional water on the Colorado River and he began sending engineers and miners to clear the heading at the San Jacinto Tunnel that he knew was key to the construction of the Colorado River Aqueduct.

The aqueduct's water provided developers with the resources to quickly develop the San Fernando Valley and Los Angeles through World War II. Mulholland's role in the vision and completion of the aqueduct and the growth of Los Angeles into a large metropolis is recognized with the William Mulholland Memorial Fountain, built in 1940 at Riverside Drive and Los Feliz Boulevard in Los Feliz. Mulholland Drive and Mulholland Dam are both named after him.

Many more cities and unincorporated areas would likely have annexed into the city of Los Angeles if the St. Francis Dam had not collapsed. The catastrophic failure of the St. Francis Dam in 1928 killed an estimated 431 people, flooded parts of Santa Clarita, and devastated much of the Santa Clara River Valley in Ventura County.

The failure of the dam raised the question in a number of people's minds whether the city had engineering competence and capability to manage such a large project as the Colorado River Aqueduct despite the fact that they had built the Los Angeles Aqueduct. After the collapse, the pace of annexation came to a rapid halt when eleven nearby cities including Burbank, Glendale, Pasadena, Beverly Hills, San Marino, Santa Monica, Anaheim, Colton, Santa Ana, and San Bernardino decided to form the Metropolitan Water District with Los Angeles. The city's growth following the formation of the MWD would be limited to 27.65 square miles.

The Cascades, which was completed on November 5, 1913, is located near the intersection of Foothill Boulevard and Balboa Boulevard, four miles northwest of San Fernando. It was designated as a California Historical Landmark on July 28, 1958.

All content from Kiddle encyclopedia articles (including the article images and facts) can be freely used under Attribution-ShareAlike license, unless stated otherwise. Cite this article:
Los Angeles Aqueduct Facts for Kids. Kiddle Encyclopedia.