Owens Valley (Numic: Payahǖǖnadǖ, meaning "place of flowing water") is an arid valley of the Owens River in eastern California in the United States. It is located to the east of the Sierra Nevada, west of the White Mountains and Inyo Mountains, and north of the Mojave Desert. It sits on the west edge of the Great Basin. The mountain peaks on the West side (including Mount Whitney) reach above 14,000 feet (4,300 m) in elevation, while the floor of the Owens Valley is about 4,000 feet (1,200 m), making the valley the deepest in the United States. The Sierra Nevada casts the valley in a rain shadow, which makes Owens Valley "the Land of Little Rain." The bed of Owens Lake, now a predominantly dry endorheic alkali flat, sits on the southern end of the valley.

The valley provides water to the Los Angeles Aqueduct, the source of one-third of the water for Los Angeles, and was the area at the center of one of the fiercest and longest-running episodes of the California Water Wars. These episodes inspired aspects of the 1974 film Chinatown. The current arid nature of the valley is mostly due to LADWP diverting the water of the region. For example, Owens Lake was completely emptied by 1926, only 13 years after LA began diverting water. 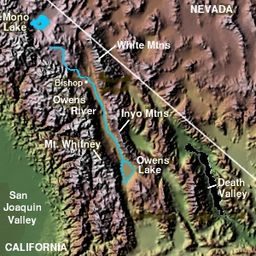 Owens Valley is a graben—a downdropped block of land between two vertical faults. Owens Valley is the westernmost graben in the Basin and Range Province. It is also part of a trough which extends from Oregon to Death Valley called the Walker Lane.

The western flank of much of the valley has large moraines coming off the Sierra Nevada. These unsorted piles of rock, boulders, and dust were pushed to where they are by glaciers during the last ice age. An excellent example of a moraine is on State Route 168 as it climbs into Buttermilk Country.

This graben was formed by a long series of earthquakes, such as the 1872 Lone Pine earthquake, that have moved the graben down and helped move the Sierra Nevada up. The graben is in fact much larger than the depth of the valley suggests; gravity studies suggest that 10,000 feet (3,000 m) of sedimentary rock mostly fills the graben and that a very steep escarpment is buried under the western length of the valley. The topmost part of this escarpment is exposed at Alabama Hills.

The Owens Valley is also part of the Long Valley Caldera, a super-volcano that last erupted 260,000 years ago. It is filled with many mini-volcanoes, which look like hills, such as Crater Mountain.

See also: Inyo and Mono Craters. Smaller versions of the Devils Postpile, can be found, for example, by Little Lake. 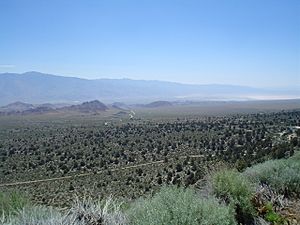 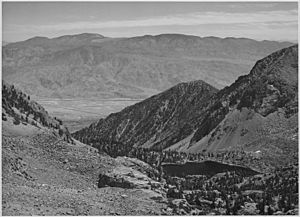 Owens Valley, photographed from Sawmill Pass by Ansel Adams, circa 1936.

The valley contains plants adapted to alkali flat habitat. One of these, the Owens Valley checkerbloom (Sidalcea covillei), is endemic to Owens Valley.

The valley was inhabited in late prehistoric times by the Timbisha (also called Panamint or Koso) in the extreme south end around Owens Lake and by the Mono tribe (also called Owens Valley Paiute) in the central and northern portions of the valley. The Timbisha speak the Timbisha language, classified in the Numic branch of Uto-Aztecan language family. The closest related languages are Shoshoni and Comanche. The Eastern Mono speak a dialect of the Mono language which is also Numic, but is more closely related to Northern Paiute. The Timbisha presently live in Death Valley at Furnace Creek although most families also have summer homes in the Lone Pine colony. The Eastern Mono live in several colonies from Lone Pine to Bishop. Trade between Native Americans of the Owens Valley between coastal tribes such as the Chumash has been indicated by the archaeological record.

On May 1, 1834, Joseph R. Walker entered Owens Valley at the mouth of Walker Pass. He and his group of 52 men traveled up the valley on their way back to the Humboldt Sink, and back up the Humboldt River to the Rocky Mountains.

In 1845, John C. Fremont named the Owens valley, river and lake for Richard Owens, one of his guides. Camp Independence was established on Oak Creek nearby modern Independence, California, on July 4, 1862, during the Owens Valley Indian War.

From 1942 to 1945 during World War II, the first Japanese American Internment camp operated in the valley at Manzanar near Independence, California. 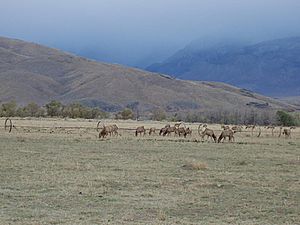 In the early 20th century, the valley became the scene of a struggle between local residents and the city of Los Angeles over water rights. William Mulholland, superintendent of the Los Angeles Department of Water and Power (LADWP) planned the 223-mile (359 km) Los Angeles Aqueduct, completed in 1913, which diverted water from the Owens River. The water rights were acquired in a deceitful manner, often splitting water cooperatives and pitting neighbors against one another. In 1924, local farmers were fed up with the purchases and erupted in violence, sabotaging parts of the water system.

Eventually Los Angeles acquired a large portion of the water rights to over 300,000 acres (121,000 ha) of land in the valley, almost completely diverting the inflows of water away from Owens Lake. This acquisition was made following negotiations in which Los Angeles and the Owens Valley farmers were engaged in a bilateral monopoly. By modern estimates, Los Angeles would have been willing to pay up to $8.70 per acre-foot ($7.05/thousand cubic meters) of water. Eventually the average actual transaction price was near $4.00 per acre-foot ($3.25/thousand cubic meters). The next best option was continuing to use the land for agricultural uses, which fetched a much lower price. Although this price was lower than Los Angeles' willingness to pay, the farmers of Owens Valley received a premium for their land compared to land values in neighboring counties. More over, the farmers who resisted the longest during the Owens Valley Transfers were able to sell their land for even higher prices than the average farmer received due to Los Angeles' willingness to settle. As a result of these acquisitions, the lake subsequently dried up completely, leaving the present alkali flat which plagues the southern valley with alkali dust storms.

Years of litigation followed. In 1997, Inyo County, Los Angeles, the Owens Valley Committee, the Sierra Club, and other concerned parties signed a Memorandum of Understanding that specified terms by which the lower Owens River would be rewatered by June 2003. LADWP missed this deadline and was sued again. Under another settlement, this time including the state of California, Los Angeles promised to rewater the lower Owens River by September 2005. As of February 2005, LADWP announced it was unlikely to meet this extended deadline. Finally, in 2008, Los Angeles fulfilled its promise and rewatered the lower Owens River.

In July 2004, Los Angeles mayor James Hahn proposed barring all future development on its Owens Valley holdings, by proposing a conservation easement for all LADWP land. As of October 2004, Inyo County officials seemed to be resisting the offer of the easement, perhaps due to the prior history of mistrust over LADWP actions. Los Angeles began using a new, organic method of suppressing airborne dust from the dry bed of Owens Lake in 2014 per an agreement between the city and Great Basin Unified Air Pollution Control District, the Owens Valley air quality regulators, ending a bitter decades-long dispute over the water and dust.

All content from Kiddle encyclopedia articles (including the article images and facts) can be freely used under Attribution-ShareAlike license, unless stated otherwise. Cite this article:
Owens Valley Facts for Kids. Kiddle Encyclopedia.