The White Mountains of California and Nevada are a triangular fault-block mountain range facing the Sierra Nevada across the upper Owens Valley. They extend for approximately 60 mi (97 km) as a greatly elevated plateau about 20 mi (32 km) wide on the south, narrowing to a point at the north, with elevations generally increasing south to north. The range's broad southern end is near the community of Big Pine, where Westgard Pass and Deep Springs Valley separate it from the Inyo Mountains. The narrow northern end is at Montgomery Pass, where U.S. Route 6 crosses. The Fish Lake Valley lies east of the range; the southeast part of the mountains are separated from the Silver Peak Range by block faulting across the Furnace Creek Fault Zone, forming a feeder valley to Fish Lake Valley. The range lies within the eastern section of the Inyo National Forest.

Ecologically, the White Mountains are like the other ranges in the Basin and Range Province; they are dry, but the upper slopes from 9,200 to 11,500 ft (2,800 to 3,500 m) hold open subalpine forests of Great Basin bristlecone pine on permeable dolomite and certain granite substrates and limber pine on less permeable rocky substrates. Middle slopes from 6,500 to 8,200 ft (2,000 to 2,500 m) have somewhat denser stands of piñon pine and Utah juniper. These upper and lower conifer zones are often separated by a zone of mountain mahogany brush. Various subspecies of sagebrush (Artemisia tridentata) extend from surrounding valleys to the lower alpine zone. 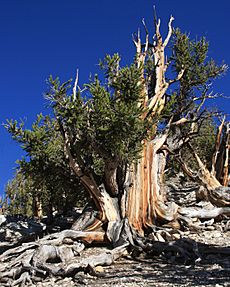 A bristlecone pine in the southern part of the range is the oldest known living tree in the world, at 5063 years old. Pine nuts from piñon pine stands were harvested as a winter staple food by Paiute Indians whose descendants still live in adjacent valleys.

Fauna include two herds of bighorn sheep, mule deer, marmots and feral horses. Permanent streams have no native fish, but there are naturalized populations of trout including rare Paiute cutthroat trout which is protected from angling. Birds include Clark's nutcracker and other Corvidae which eat and cache pine nuts.

Cattle from ranches in surrounding valleys are still grazed under permit as high as the alpine zone. Historically sheep were also grazed in large numbers, introducing diseases from which the native Bighorn Sheep populations are still slowly recovering. Before European colonization of surrounding valleys in the mid 19th century, Paiute Indians occupied summer hunting camps up to about 13,100 ft (4,000 m), leaving ruins of archeological interest. 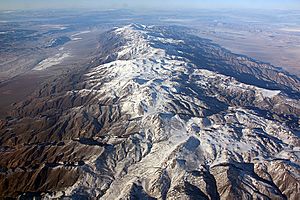 Aerial view of the White Mountains.

The highest point in the range is White Mountain Peak, which at 14,252 ft (4,344 m) is the third-highest summit in California. This peak is actually an extinct volcano rising about 1,600 ft (490 m) above the plateau surface. The summit is composed of Mesozoic metavolcanic rock – lava lifted and melted by rising granite. The volcano itself is long since gone. The White Mountains are the highest range completely inside the Great Basin, although the adjacent Sierra Nevada Range along the basin's western edge has two higher summits. The entire range is within the Inyo National Forest.

A four-wheel drive road reaches the summit from the south to service the summit laboratory of the White Mountain Research Station. The road is normally gated seven miles from the summit at an elevation of 11,680 ft (3,560 m), making this California's easiest 14,000 ft (4,300 m) summit. 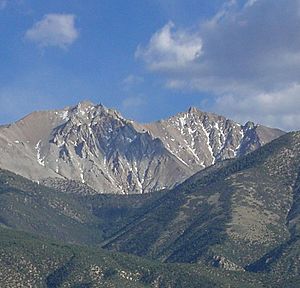 Boundary and Montgomery Peaks at the north end of the range

The crest crosses the California–Nevada state line just south of a final high summit Boundary Peak 13,147 ft (4,007 m), Nevada's high point. Boundary Peak is the "prow" of the triangular fault block. It has views directly down into valleys to the west, north and east that are hidden by the increasing width of the high plateau to the south. North of Boundary Peak the range rapidly loses altitude and ends at Montgomery Pass.

The west face of the White Mountains rises steeply out of Owens Valley. Climbing to any summit from this direction is a scramble with about 8,000 ft (2,400 m) elevation gain. Eastern slopes are somewhat gentler and have numerous cirques left by Pleistocene glaciers and even a few snowfields persisting through most summers. Most of these cirques are entered or approached by jeep roads and offer scenic yet non-technical routes to the crest.

All content from Kiddle encyclopedia articles (including the article images and facts) can be freely used under Attribution-ShareAlike license, unless stated otherwise. Cite this article:
White Mountains (California) Facts for Kids. Kiddle Encyclopedia.