Big Pine (formerly, Bigpine) is a census-designated place (CDP) in Inyo County, California, United States. Big Pine is located approximately 15 miles (24 km) south-southeast of Bishop, at an elevation of 3,989 feet (1,216 m). The population was 1,756 at the 2010 census, up from 1,350 at the 2000 census. The Big Pine Band of Owens Valley Paiute Shoshone Indians of the Big Pine Reservation operates their tribal headquarters from here. 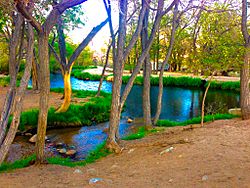 One of the many streams from the Sierra Nevada in Big Pine.

Big Pine is located in the Owens Valley of California between the Sierra Nevada and the White Mountains, just west of the Owens River upstream of its diversion into the Los Angeles Aqueduct. It lies on U.S. Route 395, the main north-south artery through the Owens Valley, connecting the Inland Empire to Reno, Nevada. US 395 also connects Big Pine to Los Angeles via State Route 14 through Palmdale.

To the East, CA route 168 crosses the White Mountains over Westgard Pass to the basin and range province of Nevada, while Death Valley Road leads to Death Valley. The plaque beneath the young giant sequoia (pictured) at the road junction says it was planted in 1913 to commemorate the opening of Westgaard Pass to auto traffic. North from Westgaard Pass lies the Ancient Bristlecone Pine Forest, home to the oldest trees in the world.

To the West, Glacier Lodge Road leads high up Big Pine Creek into the Sierra, to lakes, hiking trails, fishing, and rock climbing underneath the Palisades Range and the Palisade Glacier. 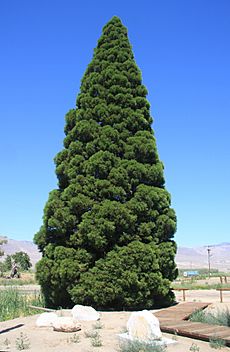 Big Pine has a significant geologic feature (an earthquake scarp) related to the 1872 Lone Pine earthquake.

In 1958, the Owens Valley Radio Observatory was established just north of Big Pine.

Matt Williams, a professional baseball player and manager, lived there for part of his life. Hollywood character actor Elisha Cook, Jr., known for such classic films as The Maltese Falcon and Shane, had a home in Big Pine and died here in 1995.

There were 571 households out of which 24.2% had children under the age of 18 living with them, 59.5% were married couples living together, 5.6% had a female householder with no husband present, and 29.4% were non-families. 24.7% of all households were made up of individuals and 11.9% had someone living alone who was 65 years of age or older. The average household size was 2.29 and the average family size was 2.70.

Alice Piper, a 15-year-old Native American living in Big Pine in 1923, wanted to attend Big Pine school, but was denied on her ethnicity. Piper, the daughter of Pike and Annie Piper, sued the school district claiming the state law establishing separate schools for “Indian children” and other children of Asian parentage was unconstitutional.

The State Supreme Court ruled unanimously that because Alice Piper's father was a tax-paying citizen, that Alice Piper therefore qualified as a citizen under the Dawes Act. The court did not, in fact, find that her 14th Amendment rights had been violated. Nonetheless, Alice Piper was invited as a pupil and her victory along with the passage the Indian Citizenship Act, on the same day opened the door for herself and other Native American children to attend public schools in the state of California. Because of this, the Big Pine School District is memorialized as a major player in the constitutional battle over the rights of Native Americans to attend public schools segregated for “whites only.”

The Piper case has become a landmark case and is viewed as the legal authority guaranteeing Native American children the right to attend public schools. It has been used as precedence in other cases such as Brown v. Board of Education.

Norman Clyde (April 8, 1885 – December 23, 1972) was a famous mountaineer, nature photographer, and self trained naturalist. He is well known for achieving over 100 first ascents, many in California's Sierra Nevada and Montana. He also set a speed climbing record on Mount Shasta in 1923. In the 1950s and 1960s, he lived by himself at the old Baker ranch-house on Baker Creek near Big Pine. He also served as a caretaker of Glacier Lodge on Big Pine Creek and a fishing cabin owned by Lon Chaney Sr. in the Palisades above Big Pine.

Clyde was born in Philadelphia, the son of a Presbyterian minister. He attended Geneva College graduating in the Classics in June 1909. After teaching at several rural schools, including Fargo, North Dakota and Mount Pleasant, Utah, he enrolled at the University of California, Berkeley in 1911. After two years of graduate work he returned to teaching, mostly in northern California. On June 15, 1915, Norman Clyde married Winifred May Bolster in Pasadena, California. Winnie was a nurse at a tuberculosis hospital, and contracted the disease herself. After 4 years of suffering she died at age 28 in 1919. His wife's death appears to have profoundly affected him as he moved to the Eastern Sierra to spend much of his latter life alone.

Clyde spent many summers traveling about in the Sierra Nevada, bagging first ascents. He served as climbing leader at Sierra Club base camps where he became known as "the pack that walks like a man" because of the huge backpacks he carried. In addition to as many as five cameras, he carried a hammer and cobbler's anvil in order to make field repairs to client's boots.

All content from Kiddle encyclopedia articles (including the article images and facts) can be freely used under Attribution-ShareAlike license, unless stated otherwise. Cite this article:
Big Pine, California Facts for Kids. Kiddle Encyclopedia.