Bishop (formerly Bishop Creek) is a city in California, United States. It is the largest populated place and only incorporated city in Inyo County. Bishop is located near the northern end of the Owens Valley, at an elevation of 4,150 feet (1,260 m). The city was named after Bishop Creek, flowing out of the Sierra Nevada; the creek was named after Samuel Addison Bishop, a settler in the Owens Valley. Bishop is a commercial and residential center, while many vacation destinations and tourist attractions in the Sierra Nevada are located nearby.

The population of the city was 3,879 at the 2010 Census, up from 3,575 at the 2000 Census. The population of the built-up zone containing Bishop is much larger; more than 14,500 people live in a compact area that includes Bishop, West Bishop, Dixon Lane-Meadow Creek, and the Bishop Paiute Reservation. It is by far the largest settlement in Inyo County.

A number of western films were shot in Bishop, including movies starring John Wayne, Charlton Heston and Joel McCrea.

It is on U.S. Route 395, the main north-south artery through the Owens Valley, connecting the Inland Empire to Reno, Nevada. US 395 also connects Bishop to Los Angeles via State Route 14 through Palmdale. Bishop is the western terminus of U.S. Route 6. The Paiute-Shoshone Indians of the Bishop Community of the Bishop Colony control land just west of the town. The Los Angeles Department of Water and Power (DWP) controls much of the upstream and surrounding area.

Bishop is immediately to the east of the Sierra Nevada, and west of the White Mountains. Numerous peaks are within a short distance of Bishop, including Mount Humphreys (13,986 ft.), to the west, White Mountain Peak (14,242 ft.) in the northeast, and pyramidal Mount Tom (13,658 ft.) northwest of town. Basin Mountain (13,187 ft.) is viewed to the west from Bishop as it rises above the Buttermilks.

Bishop is known as the "Mule Capital of the World" and a week-long festival called Bishop Mule Days has been held since 1969 on the week of Memorial Day, celebrating the contributions of pack mules to the area. The festival attracts many tourists, primarily from the Southern California area.

Bishop is well known in the rock climbing community. Near the city are numerous climbing spots that attract visitors from around the world. There are over 2,000 bouldering problems in Bishop. The two main types of rock are volcanic tuff and granite. 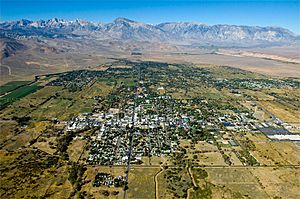 Aerial view of Bishop, looking west. Line Street, Bishop's main East-West Street, is in center left, running from the bottom of the photo into the distance.

The demographic information below applies to residents living within the city limits of Bishop; 3,879 in downtown Bishop. 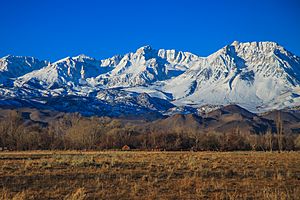 In order to support the growth aspirations of the City of Los Angeles, water was diverted from the Owens River into the Los Angeles Aqueduct in 1913. The Owens Valley cultures and environments changed substantially. From the 1910s to 1930s the Los Angeles Department of Water and Power purchased much of the valley for water rights and control. The economy of Bishop suffered when farmers sold their land. Jack Foley, a Bishop resident and sound effects specialist, mitigated the economic loss by persuading several Los Angeles studio bosses that the town of Bishop would be ideal as a location to shoot westerns.

Erick Schat's Bakkerÿ is a bakery and tourist attraction in Bishop. It is known for a unique bread, called Original Sheepherder's Bread (trademarked in 1938) and produces 450 other products. The bakery produces approximately 25,000 loaves of bread per day, and they have produced their Sheepherder's bread continuously since 1907. The bakery uses a basque recipe. The bakery has a staff of 77 under the oversight of Erick Schat, and bakes the bread in stone hearth ovens, with no preservatives, with everything handmade from scratch, including the yeast.

All content from Kiddle encyclopedia articles (including the article images and facts) can be freely used under Attribution-ShareAlike license, unless stated otherwise. Cite this article:
Bishop, California Facts for Kids. Kiddle Encyclopedia.