Kids Encyclopedia Facts
This page is about the section of U.S. Route 6 in California. For the entire route, see U.S. Route 6. 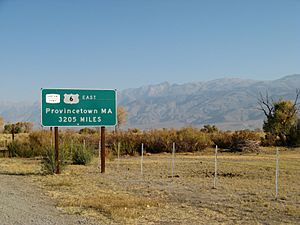 Although this recent sign states that US 6 is travelling east, it was still declared a north–south route by Caltrans.

U.S. Route 6 (US 6) is a transcontinental United States Numbered Highway, stretching from Bishop, California, in the west to Provincetown, Massachusetts, in the east. The California portion of US 6 lies in the eastern portion of the state from Bishop in the Owens Valley north to the Nevada state line in Mineral County. Prior to a 1964 Highway renumbering project US 6 extended to the Pacific Ocean in Long Beach, California, as part of the historic auto trail named the Grand Army of the Republic Highway.

Starting in Inyo County, US 6 begins its route at Bishop at a junction with US 395 near the Bishop Paiute-Shoshone Indian Colony. After leaving Inyo County and entering Mono County, the highway proceeds due north to the town of Benton, and makes a junction with SR 120. The highway then begins ascending the lower foothills of the White Mountains, towards Montgomery Pass in Nevada. The highway reaches the state line before cresting the pass. While still in California, the highway passes Boundary Peak, the highest point in Nevada. 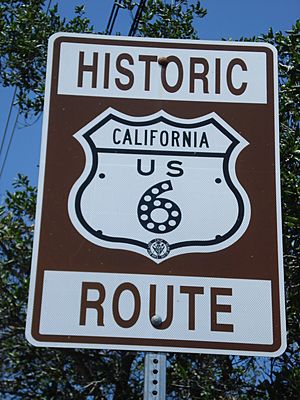 Historic Route 6 sign near the southern terminus of Sierra Hwy.

The California portion of US 6 was originally commissioned in 1937 as an extension of the highway from Greeley, Colorado as part of the historic Grand Army of the Republic Highway auto trail.

Grand Army of the Republic Highway

US 6 was later extended further south through the Mojave Desert and Los Angeles to Long Beach in Southern California. It traveled along with what is now US 395, SR 14 (Sierra Highway), I-5, I-110 / SR 110, and SR 1. When the Four Level Interchange was constructed, US 6 was the original number for SR 110 at this interchange.

It formerly ran from Long Beach west to San Pedro and continued north on Figueroa Street, briefly concurrent with US 66 in Los Angeles before turning northwest and co-signing with US 99 on San Fernando Road. US 66 continued north on the Pasadena Freeway before also being decommissioned in 1964, leading to the Harbor and Pasadena freeways being redesignated to SR 11, which ran from Gaffey Street in San Pedro to Colorado Boulevard in Pasadena. In 1981, the Harbor Freeway between Gaffey Street and Interstate 10 became Interstate 110, replacing the SR 11 designation. The northern segment of SR 11 continuing to Glenarm Street became SR 110, which continues briefly as the Harbor Freeway before becoming the Pasadena Freeway north of the Four Level Interchange with US 101.

In 1964, all of the route of US 6 in California south of Bishop lost official status with its US 6 signs removed. The highway was truncated to Bishop as part of a 1964 highway renumbering project.

Except where prefixed with a letter, postmiles were measured on the road as it was in 1964, based on the alignment that existed at the time, and do not necessarily reflect current mileage. R reflects a realignment in the route since then, M indicates a second realignment, L refers an overlap due to a correction or change, and T indicates postmiles classified as temporary (for a full list of prefixes, see the list of postmile definitions). Segments that remain unconstructed or have been relinquished to local control may be omitted. The numbers reset at county lines; the start and end postmiles in each county are given in the county column.

All content from Kiddle encyclopedia articles (including the article images and facts) can be freely used under Attribution-ShareAlike license, unless stated otherwise. Cite this article:
U.S. Route 6 in California Facts for Kids. Kiddle Encyclopedia.