U.S. Highways have signs like this one to tell people which road they are on.

The United States Numbered Highways is a national system of roads in the United States. These roads connect to places across the country. Some of the roads are freeways, which means cars must use ramps in order to get on or off the road, but others are surface roads. Many U.S. Highways, such as U.S. Route 66, have had their numbers removed because of the creation of the Interstate Highway System. 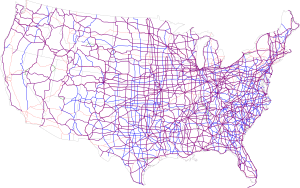 All content from Kiddle encyclopedia articles (including the article images and facts) can be freely used under Attribution-ShareAlike license, unless stated otherwise. Cite this article:
United States Numbered Highways Facts for Kids. Kiddle Encyclopedia.