Olympia is the capital of the U.S. state of Washington and the county seat of Thurston County. It was incorporated on January 28, 1859. The population was documented as 46,478 in the 2010 census. The city borders Lacey to the east and Tumwater to the south. Olympia is a major cultural center of the Puget Sound region. Olympia is located 60 miles (100 km) southwest of Seattle, the largest city in the state of Washington, and falls within the borders of the Seattle CSA.

The site of Olympia has been home to Lushootseed-speaking peoples for thousands of years, including Squaxin, Nisqually, Puyallup, Chehalis, Suquamish, and Duwamish.

The first recorded visit by Europeans was in 1792 when Peter Puget and a crew from the British Vancouver Expedition charted the site. In 1846, Edmund Sylvester and Levi Smith jointly claimed the land that now comprises downtown Olympia. In 1851, the U.S. Congress established the Customs District of Puget Sound for Washington Territory and Olympia became the home of the customs house. Its population steadily expanded from Oregon Trail immigrants. In 1850, the town settled on the name Olympia, at the suggestion of local resident Colonel Isaac N. Ebey, due to its view of the Olympic Mountains to the Northwest. The area began to be served by a small fleet of steamboats known as the Puget Sound Mosquito Fleet.

In 1896, Olympia became the home of the Olympia Brewing Company, which brewed Olympia Beer until 2003.

The 1949 Olympia earthquake damaged many historic buildings beyond repair, and they were demolished. Parts of the city also suffered damage from earthquakes in 1965 and 2001.

In 1967, the state legislature approved the creation of The Evergreen State College in Olympia. Since 1984, Olympia has also been home to the South Puget Sound Community College. Olympia has become a hub for artists and musicians, and has been named one of the best college towns in the nation for its vibrant downtown and access to outdoor activities. 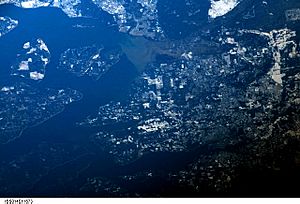 The city of Olympia is located at the southern end of Puget Sound on Budd Inlet. The Deschutes River estuary was dammed in 1951 to create Capitol Lake. Much of the lower area of downtown Olympia sits on reclaimed land. The cities of Lacey and Tumwater border Olympia.

Olympia has a wide array of public parks and nature conservation areas. The Woodard Bay Natural Resources Conservation Area is a 600-acre (2.4 km2) parcel that preserves more than 5 miles (8.0 km) of Puget Sound waterfront along the Woodard and Chapman Bays of the Henderson Inlet. Percival Landing Park includes 0.9 miles (1.4 km) of boardwalk along Budd Inlet, as well as a playground, picnic areas, and a large open space. Percival Landing closed in 2010 for an extensive remodel after saltwater degradation and opened again to the public in the summer of 2011. The Watershed Park is the site of the former waterworks for the city and today features a loop trail with a large second-growth forest. Other parks include Priest Point Park, Burfoot Park, Sunrise Park, and Yauger Park, which is home to one of Olympia's public skate parks, including Friendly Grove, which is nestled in a small Eastside Community, and Trillium Park, which was created by the efforts of adjoining neighborhood associations with the easement of private property. The Nisqually National Wildlife Refuge is located just outside Olympia, as is the Capitol State Forest.

Olympia was historically dependent on artesian waters. Early settlers in Swantown and Tumwater used artesian springs for their main water supply. The artesian spring at Fourth Avenue and Main Street (now called Capitol Way) was the main community well where settlers gathered to socialize. The artesian well at Artesian Commons park, a former parking lot, is active. Another still flows at the corner of Olympia Avenue and Washington Street. A small park was constructed around another spring in the Bigelow Neighborhood. The northeast end of Capitol Lake was the location of an artesian well until the construction of a new park that included changes to the shoreline. McAllister Springs, the main water source for Olympia, is fed by artesian wells, and the former Olympia Brewery is supplied by 26 artesian wells.

Recent efforts to protect and preserve the free flowing artesian well on 4th Ave in downtown Olympia began in 1991 when Jim Ingersoll, a local psychologist, called on the city council to acquire the well and develop it as a community park. Ingersoll’s interest in the well started in a conversation with Dick Batdorf, co-founder of Batdorf and Bronson coffee roasting. Batdorf told Ingersoll that the secret to great coffee was great water – specifically artesian water. Subsequently, Ingersoll met at the Spar restaurant with Herb Legg and John Robinson both of whom had worked in the 1950s and 60s to protect the artesian wells in Watershed Park. Legg and Robinson worked behind the scenes to get an article published in the Olympian on February 24, 1992 calling for community support of the well. Ingersoll was flooded with phone calls offering time, talent, resources and money following the publication. Herb Legg and friends sponsored a public meeting at the Library where more than 50 people each donated $50. And a single $3000 donation followed the next day.

With hundreds of people using the well every day, community support grew to become “The Friends of Artesians,” an informal organization of advocates who over the course of 20 years mapped and researched the history of artesian wells in Olympia, raised money to test water quality and make improvements to the site and kept the vision of a free flowing community well alive. In the fall of 2008, The Friends announced they would stop testing the water quality after February 2009. These actions renewed interest in protecting the well and lead to the creation of H2Olympia, a non-profit organization.

In downtown Olympia, efforts to preserve the use of artesian water at the one remaining public well has been the mission of H2Olympia: Artesian Well Advocates. In 2011, the city of Olympia committed $50,000 towards improvements of an artesian well, located in a parking lot that was recently purchased by the city. Renovations at the artesian well were completed in late 2011, including surface improvements, solar lighting, and a raised area to fill bottles. In Spring of 2012, sea-themed mosaic artwork created by community members was also installed at the site of the well.

There were 20,761 households of which 25.6% had children under the age of 18 living with them, 36.2% were married couples living together, 11.3% had a female householder with no husband present, 3.9% had a male householder with no wife present, and 48.6% were non-families. 36.3% of all households were made up of individuals and 11.7% had someone living alone who was 65 years of age or older. The average household size was 2.18 and the average family size was 2.83. 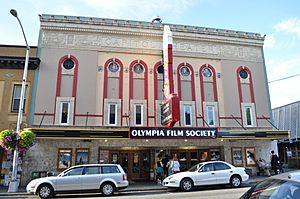 The Capitol Theater, home of the Olympia Film Society.

Visual art venues include some of the local coffeehouses, Olympia Coffee Roasting Co., Batdorf & Bronson, Caffe Vita, and Obsidian in downtown. A gallery called Art House Designs presents works of sculpture, painting, and printmaking and hosts a jazz performance space. Murals and public art installations of sculpture are prevalent in Olympia and are especially featured on the State Capitol Campus and along Percival Landing on the urban waterfront. The Washington Center for the Performing Arts also presents visual art exhibitions throughout the season in the spacious lobby areas.

Notable art venues near Olympia include Art in Ecology, housed in Washington Department of Ecology's 322,000-square-foot, three-story building on the campus of Saint Martin's University. Art in Ecology is a long-established art-in-the-workplace venue that features works by numerous northwest artists. Permanent installations by Alfredo Arreguin, commissioned by the Washington State Arts Commission, are accompanied by changing solo and group exhibitions throughout the year. Appointments to view the works are needed; tours take about an hour.

The South Puget Sound Community College has a gallery in its Minnaert Center with rotating exhibitions. The Evergreen State College, northwest of Olympia, has a professionally curated gallery with rotating shows in the Dan Evans Library building. To the south of Olympia, Monarch Contemporary Art Center and Sculpture Park offers an 80-acre sculpture garden and art gallery.

Each year, the Olympia Film Society (OFS) produces a film festival and fosters film and video education in Olympia. It also shows independent, classic, and international films year-round at the art-deco Capitol Theater. A mostly volunteer-powered organization, OFS supports and presents a variety of cultural events, including All Freakin' Night, an all-night horror film screening with a cult following. 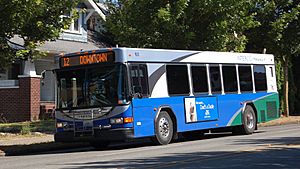 Olympia, Lacey, Tumwater, and the surrounding area are primarily served by Intercity Transit, with connections to Grays Harbor Transit, Mason Transit Authority, Pierce Transit, and Sound Transit. Intercity Transit maintains a free shuttle route called "Dash". Dash runs from the Capitol Campus to the Farmers Market at the far edge of downtown. Intercity Transit's Olympia Express provides service to Lakewood and Tacoma, with connections to regional bus and commuter rail service. In 2009 Intercity Transit won an award for America's best Public Transportation System in the midsize category by the American Public Transportation Association. The fleet runs entirely on biodiesel fuel and is composed of about 20% biodiesel-electric hybrid buses.

The Olympia Regional Airport, operated by the Port of Olympia is located just south of Olympia in Tumwater. It serves general aviation as well as corporate aviation. The airport plays host to the Olympic AirShow, a moderate-sized airshow that occurs on Father's Day weekend each year.

Olympia is twinned with:

There were previous agreements with Olympia, Greece and Samarkand, Uzbekistan but these are no longer in effect.

All content from Kiddle encyclopedia articles (including the article images and facts) can be freely used under Attribution-ShareAlike license, unless stated otherwise. Cite this article:
Olympia, Washington Facts for Kids. Kiddle Encyclopedia.