Artesian Commons is a 0.2-acre (0.081 ha) park in downtown Olympia, Washington built in May 2014 around an artesian spring. It is described by the city as Olympia's first urban park (Sylvester Park in the Olympia Downtown Historic District is state-owned). 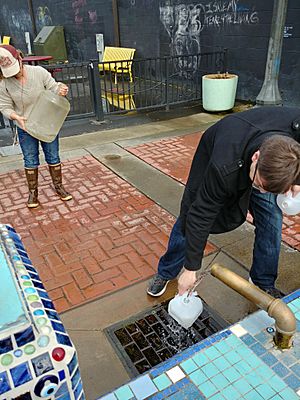 The free, public downtown artesian spring has long been used by Olympians for drinking water, along with other springs used to make beer brewed at Well 80 Artesian Brewing across the street from Artesian Commons; and commercial kombucha at Magic Kombucha, and beer at McMenamins Spar Café and Fish Brewing Company, all nearby in the downtown area. Artesian well water is tested by the city, along with the main city supplies at McAllister Wellfield (replacing McAllister Springs since the 2010s) and Allison Springs. Lead levels at the artesian spring in 2015 were less than 0.001 mg/L (the EPA action level is 0.015). A summer, 2016 survey of over 400 park users showed that the median user bottled between 4 and 6 gallons of their own water to take home, and was the only drinking water supply for 70% of the respondents.

An urban legend states that if one drinks artesian water from one of the over 90 artesian springs in Olympia, one will return to the city.

All content from Kiddle encyclopedia articles (including the article images and facts) can be freely used under Attribution-ShareAlike license, unless stated otherwise. Cite this article:
Artesian Commons Facts for Kids. Kiddle Encyclopedia.