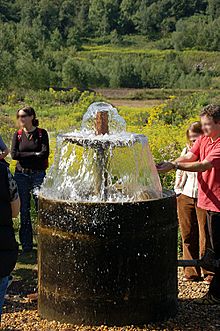 Artesian well at the Messel pit. 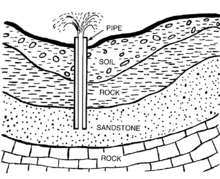 Drawing of an artesian well

An artesian aquifer is an underground layer which holds groundwater under pressure. This causes the water level in the well to rise to a point where the pressure is equal to the weight of water putting it under pressure. This type of well is called an artesian well. Water may even reach the ground surface if the natural pressure is high enough, in which case the well is called a flowing artesian well.

An aquifer is a geologic layer which can hold water such as sand and gravel, limestone, or sandstone, through which water flows and is stored. An artesian aquifer is trapped between rocks or clay which causes the pressure. Water returns to the aquifers when the water table at its recharge zone is at a higher elevation than the head of the well.

Fossil water aquifers can also be artesian if they are under sufficient pressure from the surrounding rocks. This is similar to how many newly tapped oil wells are pressurized.

There are artesian aquifers in many countries including Australia, the USA, Spain, Italy, the United Kingdom, Fiji and Canada. The Great Artesian Basin is the largest and deepest artesian basin in the world, occupying 23% of the Australian continent.

All content from Kiddle encyclopedia articles (including the article images and facts) can be freely used under Attribution-ShareAlike license, unless stated otherwise. Cite this article:
Artesian aquifer Facts for Kids. Kiddle Encyclopedia.