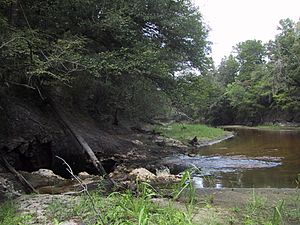 Image of the entire surface water flow of the Alapaha River near Jennings, Florida going into a sinkhole leading to the Floridan Aquifer groundwater.

Groundwater is water located beneath the ground surface in soil pore spaces and in the fractures of lithologic formations. A unit of rock or an unconsolidated deposit is called an aquifer when it can yield a usable quantity of water. The depth at which soil pore spaces or fractures and voids in rock become completely saturated with water is called the water table. Groundwater is recharged from, and eventually flows to, the surface naturally; natural discharge often occurs at springs and seeps, and can form oases or wetlands. Groundwater is also often withdrawn for agricultural, municipal and industrial use by constructing and operating extraction wells. The study of the distribution and movement of groundwater is hydrogeology, also called groundwater hydrology.

Typically, groundwater is thought of as liquid water flowing through shallow aquifers, but technically it can also include soil moisture, permafrost (frozen soil), immobile water in very low permeability bedrock, and deep geothermal or oil formation water. Groundwater is hypothesized to provide lubrication that can possibly influence the movement of faults. It is likely that much of the Earth's subsurface contains some water, which may be mixed with other fluids in some instances. Groundwater may not be confined only to the Earth. The formation of some of the landforms observed on Mars may have been influenced by groundwater. There is also evidence that liquid water may also exist in the subsurface of Jupiter's moon Europa. 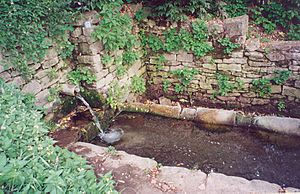 An aquifer is a layer of relatively porous substrate that contains and transmits groundwater. When water can flow directly between the surface and the saturated zone of an aquifer, the aquifer is unconfined. The deeper parts of unconfined aquifers are usually more saturated with groundwater since gravity causes water to flow downward.

The upper level of this saturated layer of an unconfined aquifer is called the water table or phreatic surface. Below the water table, where generally all pore spaces are saturated with water is the phreatic zone.

A confined aquifer is an aquifer that is overlain by a relatively impermeable layer of rock or substrate such as an aquiclude or aquitard. If a confined aquifer follows a downward grade from its recharge zone, groundwater can become pressurized as it flows. This can create artesian wells that flow freely without the need of a pump or rise to a higher elevation than the static water table at the above, unconfined aquifer.

The characteristics of aquifers vary with the geology and structure of the substrate and topography in which they occur. Generally, the more productive and useful aquifers occur in sedimentary geologic formations. By comparison, weathered and fractured crystalline rocks yield relatively smaller quantities of groundwater in many environments. Unconsolidated to poorly cemented alluvial materials that have accumulated as valley-filling sediments in major river valleys and geologically subsiding structural basins are included among the most productive sources of groundwater. 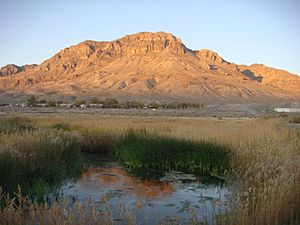 Groundwater makes up about twenty percent of the world's fresh water supply, which is about 0.61% of the entire world's water, including oceans and permanent ice.

Groundwater is naturally replenished by surface water from precipitation, streams, and rivers when this recharge reaches the water table. It is estimated that the volume of groundwater comprises 30.1% of all freshwater resource on earth compared to 0.3% in surface freshwater; the icecaps and glaciers are the only larger sources of fresh water on earth at 68.7%.

Groundwater can be a long-term 'reservoir' of the natural water cycle (with residence times from days to millennia), as opposed to short-term water reservoirs like the atmosphere and fresh surface water (which have residence times from minutes to years). The figure shows how deep groundwater (which is quite distant from the surface recharge) can take a very long time to complete its natural cycle.

The Great Artesian Basin in central and eastern Australia is one of the largest confined aquifer systems in the world, extending for almost 2 million square kilometres. By analysing the trace elements in water sourced from deep underground, hydrogeologists have been able to determine that water extracted from these aquifers can be more than 1 million years old. By comparing the age of groundwater obtained from different parts of the Great Artesian Basin, hydrogeologists have found it increases in age across the basin. Where water recharges the aquifers along the Eastern Divide, ages are relatively young. As groundwater flows westward across the continent, it increases in age, with the oldest groundwater occurring in the western parts. This means that in order to have travelled almost 1000 km from the source of recharge in 1 million years, the groundwater flowing through the Great Artesian Basin travels at an average rate of about 1 metre per year.

People drink groundwater with water wells. They drill wells deep below the surface. Then, in the aquifer, the groundwater stored inside will be pumped up and used.

All content from Kiddle encyclopedia articles (including the article images and facts) can be freely used under Attribution-ShareAlike license, unless stated otherwise. Cite this article:
Groundwater Facts for Kids. Kiddle Encyclopedia.