Jennings is a town in Hamilton County, Florida, United States. The population was 749 at the 2020 census, down from 878 at the 2010 census. It was an important area for shipping Sea Island cotton before World War I.

According to the United States Census Bureau, the town has a total area of 1.8 square miles (4.7 km2), all land. 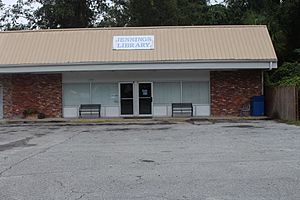 North Hamilton Elementary was consolidated into a new elementary school, Hamilton County Elementary School, located in an unincorporated area south of Jasper. Its opening was scheduled for August 2017.

All content from Kiddle encyclopedia articles (including the article images and facts) can be freely used under Attribution-ShareAlike license, unless stated otherwise. Cite this article:
Jennings, Florida Facts for Kids. Kiddle Encyclopedia.