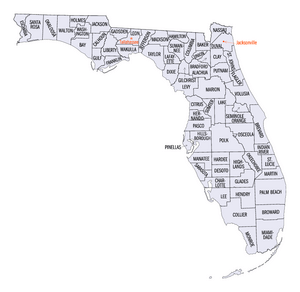 A map of Florida showing county names and boundaries

Both counties and cities may have a legislative branch (commissions or councils) and executive branch (mayor or manager) and local police, but violations are brought before a county court. Counties and municipalities are authorized to pass laws (ordinances), levy taxes, and provide public services within their jurisdictions. All areas of Florida are located within a county, but only some areas have been incorporated into municipalities. All municipalities are located within a county and the county jurisdiction overlays the municipal jurisdiction. Usually, if there is a conflict between a county ordinance and a municipal ordinance, the municipal ordinance has precedence within the municipality's borders; however, the overlaying county's ordinances have precedence if the overlaying county has been designated a charter county by the Florida Legislature:)

Counties and municipalities may create community development agencies which may take part of the money from taxes on increases in property values from their area of interest. They then use the money received in reinvestment (improvements) in the area.

Local government is not required to pay for health care insurance for government retirees. As of 2010, none do.

In 2011, researchers at Florida State University said that Florida's cities and counties have promised pensions they cannot afford. Pension obligations constituted 8% of total spending by local governments in 2009.

Florida consists of 67 counties, with most of Florida's counties named for local or national political leaders. Some are named for Spanish explorers or conquistadors, marking the influence of 200 years of Spanish rule. Natural features of the region, including rivers, lakes, and flora, are also commonly used for county names. Florida has counties named for participants on both sides of Second Seminole War: Miami-Dade County is partially named for Francis L. Dade, a Major in the U.S. Army at the time; Osceola County is named for a Native American resistance leader during the war.

Each county has officers considered "state" officers, which are elected locally, their offices and salaries paid locally, but who can be removed or replaced by the governor, and not locally. These are the Sheriff, State Attorney, Public Defender, Tax Collector, County Clerk, a county Appraiser who established the value of real estate for tax purposes, and county judges.

Each sheriff operates under Florida Statute 30.15.

By State Law there is one school district comprising each of the counties in Florida.

To provide liquidity to counties when tax bills are not paid, Florida operates under the tax lien sale process, whereby liens are sold for the amount of back taxes, interest, and costs. In Florida, bidders bid on the rate of interest (beginning at 18%) they will accept; the bidder offering the lowest rate is awarded the tax lien certificate. Once a lien has been outstanding for approximately 22 months (technically, April 1 of the second year following the year when the tax lien was originally offered for sale), the tax lien holder may petition the circuit court (via the county tax collector) to begin the process for the tax deed sale of the property.

See also: List of cities in Florida and Government of Miami

All content from Kiddle encyclopedia articles (including the article images and facts) can be freely used under Attribution-ShareAlike license, unless stated otherwise. Cite this article:
Administrative divisions of Florida Facts for Kids. Kiddle Encyclopedia.