The Villages, Florida facts for kids

The Villages is a census-designated place (CDP) in Sumter County, Florida, United States. It shares its name with a broader master-planned age-restricted community that spreads into portions of Lake and Marion counties. The Villages consistently ranks as a very high growth area. The US Census ranked The Villages as the fastest-growing U.S. city for the second year in a row (during the 12 months ending in July 2014); As of April 2016, the total population of The Villages reached 157,000 people, due to new areas stretching from Fruitland Park to South SR 44.

The Villages is controlled by several quasi-governmental Community Development Districts (CDD), which are, in turn, controlled by the development company which created The Villages. H. Gary Morse, the son of the original owner and who was responsible for turning The Villages into one of the most well-known and fastest-growing retirement communities, transferred most direct ownership in the company to his three children in 2006; Morse died in 2014. The overall development lies in central Florida, approximately 20 miles (32 km) south of Ocala and approximately 45 miles (72 km) northwest of Orlando.

Harold Schwartz, a Michigan businessman, began selling land tracts via mail order in The Villages area in the 1960s. He and his business partner, Al Tarrson, were forced to close the mail-order aspect of the business due to a 1968 Federal law banning sales of real estate by mail order.

Stuck with considerable portions of Florida land, in the early 1970s Schwartz and Tarrson began development of a mobile home park, Orange Blossom Gardens, in the northwestern corner of Lake County. By the early 1980s, the community had sold only 400 units. In an attempt to improve the business, Schwartz bought out Tarrson's interest and brought his son, H. Gary Morse, on board in 1983.

Morse noted that the successful retirement communities (such as Del Webb's Sun City developments) offered numerous well-maintained amenities to the residents. They also had diverse and nearby commercial development. Morse began to significantly upgrade the development. Their sales improved in the mid-1980s. Schwartz began to buy large tracts of land in nearby Sumter and Marion counties for future expansion. In 1992, Morse officially changed the overall development name to The Villages. The development is still controlled in all major aspects by descendants of Schwartz and Morse.

A Declaration of Restrictions has been created for each individual neighborhood, which regulates design and operational aspects, such as landscaping, repairs and maintenance, placement of satellite dishes, hedges, etc. An Architectural Review Committee controls the composition and consistency of the exterior of the residential properties within The Villages. The committee, which consists of Villages residents, reviews and approves alterations and modifications to the properties and homes built by the developer. Committee members serve for three years and are selected by the sitting committee.

To qualify for an exception to the Housing for Older Persons Act prohibitions against discrimination, at least 80% of the homes within The Villages must have at least one person 55 years of age or older residing in the home. Persons under the age of 19 years are not permitted to reside within The Villages unless an exemption is granted. Three subdivisions have been designated as "family units" and are not subject to this restriction. Otherwise, persons under age 19 (such as grandchildren) are permitted to visit for no more than 30 days within a calendar year.

There were 4,393 households out of which 0.3% had children under the age of 18 living with them, 80.1% were married couples living together, 1.2% had a female householder with no husband present, and 18.4% were non-families. 15.6% of all households were made up of individuals and 11.1% had someone living alone who was 65 years of age or older. The average household size was 1.89 and the average family size was 2.05. 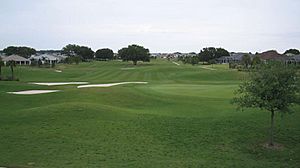 The 18th green at Tierra Del Sol, one of the nine country club golf courses at The Villages

As a master planned retirement community, The Villages offers numerous forms of recreation. The majority of the costs are paid for via the monthly amenities fee assessed to residents (the facilities are owned by the centralized CDDs discussed above).

Further information: List of golf courses in The Villages

The centerpiece of The Villages is its numerous assortment of golf courses. The ability to play "Free Golf for Life" is a key component of The Villages advertising campaigns (though technically the statement is inaccurate as the costs are covered by the mandatory monthly amenity fees assessed on each residential lot). As of February 2017[update], The Villages operates 48 courses.

The remaining 12 courses are country club championship courses. Among notable course architects are Arnold Palmer and Nancy Lopez. The Orange Blossom Hills and Tierra Del Sol clubs are 18-hole layouts; the other eight clubs are 27-hole layouts. Residents of The Villages are automatically members of these clubs; however, unlike the executive courses residents must pay greens fees to play the courses and the clubs charge for priority tee times. These championship courses are owned by the Villages Developer and through an agreement with the VCDD, are managed by that entity.

On October 15, 2013, The Villages officially opened executive courses Sweetgum and Mangrove. The most recent championship course (Belle Glade) was opened for public play on November 26, 2014.

By final buildout, The Villages will operate 12 country-club championship courses (the last two will be 27-hole layouts; there are no plans to expand Orange Blossom Hills or Tierra Del Sol beyond their existing 18-hole layouts) and 35 9-hole executive golf courses, for a total of 621 holes of golf.

The Villages also operates a golf instruction academy for all skill levels.

In addition, The Villages operates numerous recreation centers. There are three classes of centers (the number shown are as of March 2011 and are based on the types of swimming pools offered):

The Villages operates 11 parks, dog parks, and fitness trails, which are separate from the recreation centers.

Beyond the golf courses and recreation centers, The Villages also operates numerous softball fields, a polo stadium (The Villages Polo Stadium), and a woodworking shop, plus the Lifelong Learning College. The newest softball complex, Soaring Eagle, opened on January 16, 2015. 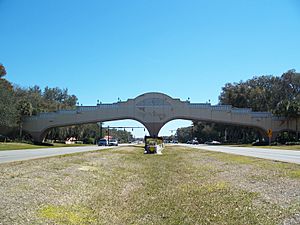 The Villages development is bounded roughly by US 27/US 441 to the east, US 301 to the west, County Road 42 to the north, and County Road 466A to the south, though construction has now proceeded well south of 466A with the development of several new villages, the Bonifay Country Club, and the Brownwood town center in that area. On December 10, 2013, The Villages of Lake-Sumter Inc. agreed to an $8 million deal to purchase Pine Ridge Dairy tract in Fruitland Park, Florida with a planned construction of 2,038 new Villages homes. Although County Road 466 previously served as the main east-west corridor, the addition of homes and facilities south of County Road 466 and in the city of Fruitland Park, Florida has turned County Road 466A into a secondary east-west corridor. Buena Vista Boulevard and Morse Boulevard serve as major north-south corridors.

Due to the prevalence of golf courses many residents in The Villages use golf carts (some of which are street-legal, and some of which are solar-powered) to travel around the community. Tunnels have been built in most of The Villages where a highway must be crossed, but one overpass exists across US 27/US 441 because there was no way to construct a tunnel in this area.

The Villages developers operate a trolley-style bus tour of the community which operates from the sales and information center located at The Market Square in Lake Sumter Landing.

Amtrak serves The Villages by connecting bus to Jacksonville and Lakeland.

All content from Kiddle encyclopedia articles (including the article images and facts) can be freely used under Attribution-ShareAlike license, unless stated otherwise. Cite this article:
The Villages, Florida Facts for Kids. Kiddle Encyclopedia.