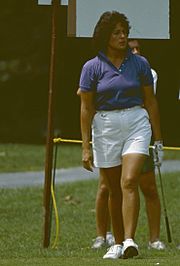 Nancy Marie Lopez (born January 6, 1957) is a retired American professional golfer. She was born in Torrance, California. She became a member of the LPGA Tour in 1977 and won 48 LPGA Tour events, including three major championships.

During her first full season on the LPGA Tour in 1978, Lopez won nine tournaments, including five consecutive. She appeared on the cover of Sports Illustrated in July of that year. She also won the Vare Trophy for lowest scoring average, LPGA Rookie of the Year, LPGA Player of the Year and was named the Associated Press Female Athlete of the Year. She won another eight times in 1979. Lopez has won multiple times in each year from 1980 to 1984, although she played only half-seasons in 1983 and 1984 due to the birth of her first child.

All content from Kiddle encyclopedia articles (including the article images and facts) can be freely used under Attribution-ShareAlike license, unless stated otherwise. Cite this article:
Nancy Lopez Facts for Kids. Kiddle Encyclopedia.