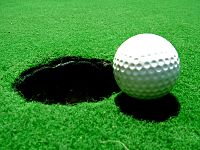 A golf ball (right) next to the hole it goes in.

Golf is a game played in an open field where the golfer plays his golf ball into a hole by using different types of clubs (golf instruments). The book Rules of Golf reads "The Game of Golf consists in playing a ball from the teeing ground into the hole by a stroke or successive strokes in accordance with the Rules." 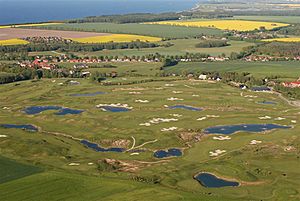 A golf course consists of either 9 or 18 holes, each with a teeing ground that is set off by two markers showing the bounds of the legal tee area, fairway, rough and other hazards, and the putting green surrounded by the fringe with the pin (normally a flagstick) and cup.

The levels of grass are varied to increase difficulty, or to allow for putting in the case of the green. While many holes are designed with a direct line-of-sight from the teeing area to the green, some holes may bend either to the left or to the right. This is commonly called a "dogleg", in reference to a dog's knee. The hole is called a "dogleg left" if the hole angles leftwards and "dogleg right" if it bends right. Sometimes, a hole's direction may bend twice; this is called a "double dogleg".

A regular golf course consists of 18 holes, but nine-hole courses are common and can be played twice through for a full round of 18 holes.

The first 18-hole golf course in the United States was on a sheep farm in Downers Grove, Illinois, in 1892. The course is still there today.

Play of the game 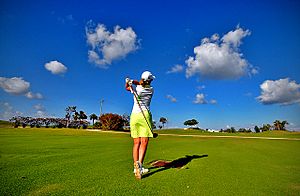 A golfer takes an approach shot on the fairway.

In golf, a golfer plays a number of holes in a given order. 18 holes played in an order controlled by the golf course design, normally make up a game. On a nine-hole course, two nine-hole rounds make up a normal game. Each hole starts from the teeing area. Golfers put the ball on a small stand called a tee and swing a club at it to try and hit it as straight and far as possible. Once each golfer in the group has done this, the person whose ball landed farthest from the hole hits his again, followed by everyone else, one person at a time, until everyone is on the green. The green is the area near the hole where the grass is cut very short. Once on the green the players will try to "put" the ball into the hole. Putting is similar to a regular swing except it is not as hard and the player does not want the ball to go in the air. Once each player has put their ball into the hole, the group moves on to the next hole.

Each time a player swings at his ball, it is considered a "stroke". Each hole is a certain number of strokes that golfers are expected to need to get their ball into the hole. This is known as the "par". If a player gets his ball in the hole in less than the par he gets a "birdie". If it takes him one more shot then the par it is known as a bogey. Most holes have a par between 3 and 5. 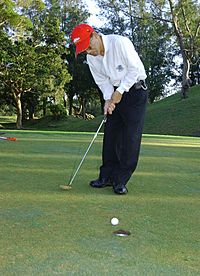 A golfer using a putter on a green to hit the ball into the hole.

The four different types of clubs used in golf are woods, irons, putters and wedges. Woods are used to hit the ball very far, usually off the tee (but also on the fairway). The name of woods is different every number, for example, No.1 wood is called "driver", No.2 is "brassey", No.3 is "spoon" and so on. There are many types of irons, which can be used to hit varying distances. They are numbered 1-9 with a 1 iron hitting the ball farther than a 9. The 1 iron is no longer common in the game. Even the 2 iron is getting uncommon. Putters are used when on the green. The rules do not let the golfer use over 14 clubs in a game.

All content from Kiddle encyclopedia articles (including the article images and facts) can be freely used under Attribution-ShareAlike license, unless stated otherwise. Cite this article:
Golf Facts for Kids. Kiddle Encyclopedia.