Kingdom of Scotland facts for kids

The Kingdom of Scotland was a sovereign state in northwest Europe traditionally said to have been founded in 843. Its territories expanded and shrank, but it came to occupy the northern third of the island of Great Britain, sharing a land border to the south with the Kingdom of England. It suffered many invasions by the English, but under Robert I it fought a successful War of Independence and remained an independent state throughout the late Middle Ages.

In 1603, James VI of Scotland became King of England, joining Scotland with England in a personal union. In 1707, the two kingdoms were united to form the Kingdom of Great Britain under the terms of the Acts of Union. 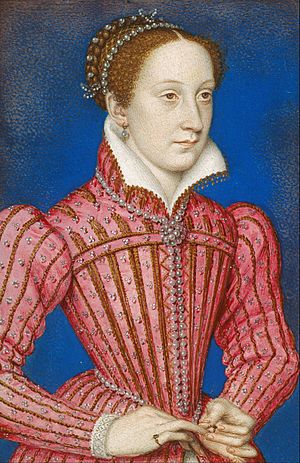 Following the conquest of the Northern Isles from the Kingdom of Norway in 1472 and final capture of the Royal Burgh of Berwick by the Kingdom of England in 1482, the territory of the Kingdom of Scotland corresponded to that of modern-day Scotland, bounded by the North Sea to the east, the Atlantic Ocean to the north and west, and the North Channel and Irish Sea to the southwest.

The Crown was the most important element of government. Edinburgh developed as a capital city in the second half of the 15th century. The Crown remained at the centre of political life and in the 16th century emerged as a major centre of display and patronage, until it was effectively dissolved with the Union of Crowns in 1603.

The Scottish Crown adopted the conventional offices of western European monarchical states of the time and developed a Privy Council and great offices of state. Parliament also emerged as a major legal institution, gaining an oversight of taxation and policy.

In the early period, the kings of the Scots depended on the great lords, but from the reign of David I, sheriffdoms were introduced, which allowed more direct control and gradually limited the power of the major lordships. In the 17th century, the creation of Justices of Peace and Commissioners of Supply helped to increase the effectiveness of local government.

Scots law developed in the Middle Ages and was reformed in the 16th and 17th centuries. Under James IV the legal functions of the council were rationalised, with Court of Session meeting daily in Edinburgh. In 1532, the College of Justice was founded, leading to the training and professionalisation of lawyers. David I is the first Scottish king known to have produced his own coinage. At the union of the Crowns in 1603 the Pound Scots was fixed at only one-twelfth the value of the English pound. The Bank of Scotland issued pound notes from 1704. Scottish currency was removed by the Act of Union, however to the present day, Scotland retains unique banknotes. 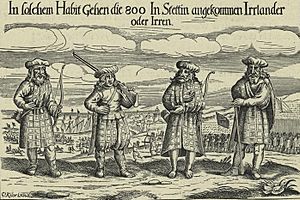 Geographically, Scotland is divided between the Highlands and Islands and the Lowlands. The Highlands had a relatively short growing season, which was further shortened during the Little Ice Age. From Scotland's foundation to the inception of the Black Death, the population had grown to a million; following the plague, it then fell to half a million. It expanded in the first half of the 16th century, reaching roughly 1.2 million by the 1690s.

Significant languages in the medieval kingdom included Gaelic, Old English, Norse and French; but by the early modern era Middle Scots had begun to dominate. Christianity was introduced into Scotland from the 6th century. There were a series of religious controversies that resulted in divisions and persecutions.

The Scottish Crown developed naval forces at various points in its history. Land forces centred around the large common army, but adopted European innovations from the 16th century; and many Scots took service as mercenaries and as soldiers for the English Crown.

All content from Kiddle encyclopedia articles (including the article images and facts) can be freely used under Attribution-ShareAlike license, unless stated otherwise. Cite this article:
Kingdom of Scotland Facts for Kids. Kiddle Encyclopedia.