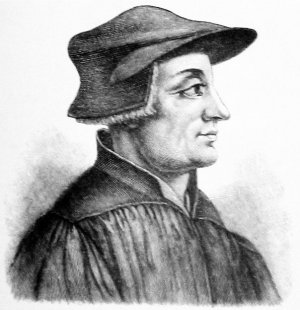 Huldrych (or Ulrich) Zwingli or Ulricus Zuinglius (January 1, 1484 – October 11, 1531) was the leader of the Protestant Reformation in Switzerland, and founder of the Swiss Reformed churches. Separately from Martin Luther, Zwingli arrived with similar final beliefs. He did this by studying the Bible from the point of view of a humanist scholar. Zwingli's father was named Ulrich Zwingli also and his mother was named Margaret Meili. Zwingli had 2 sisters and 7 brothers.

Zwingli was born in Toggenburg, Wildhaus, St. Gallen, Switzerland, to an important family of the middle class.

Zwingli's Reformation was supported by the judge and people of Zürich. It led to major changes in the lives of the people and state matters in Zürich.

Zwingli was killed at Kappel am Albis, in a battle against the Roman Catholic Cantons of Switzerland.

All content from Kiddle encyclopedia articles (including the article images and facts) can be freely used under Attribution-ShareAlike license, unless stated otherwise. Cite this article:
Huldrych Zwingli Facts for Kids. Kiddle Encyclopedia.