Cantons of Switzerland facts for kids 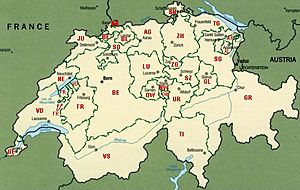 The cantons of Switzerland

Switzerland is divided into 26 different areas. Each area is called a canton. A canton is like a state in the United States.

In the past, each canton had its own army and money. This changed in 1848 when Switzerland changed to the structure it has now.

The cantons Uri, Schwyz, Unterwalden (Nidwalden and Obwalden together are called Unterwalden) are called Urkantone. An Urkanton is a canton that existed since the foundation of Switzerland in 1291. With time, other cantons joined Switzerland. Jura is the newest canton in Switzerland since 1978. In that year, it split from the canton of Berne, after some rioting.

The cantons of Basel-Stadt, Basel-Landschaft, Appenzell-Innerrhoden, Appenzell-Ausserrhoden, Obwalden and Nidwalden are different from the others in one way. For historical reasons, their voting is counted differently in national elections. Other than that, they are the same as the others.

In Switzerland, the individual municipalities and cantons are very free. Usually, there is a Swiss law (at the level of the whole confederation). Very often this states general things and says that the cantons must follow this rule. The cantons then make detailed rules, each in the way it sees fit. Sometimes this leads to strange situations. There are 26 different schooling systems.

The word for that is called federalism. That means, that each canton has its own government. So all cantons have their own constitution. The constitution is the highest law in a state.

The cantons are listed in the order given in the federal constitution.

Notes: 1 As of 31 December 2001, National Statistics, 2 km², 3 per km², based on 2000 population 4 seat of government and parliament, the seat of the judicial authorities is Trogen.

The two-letter abbreviations for Swiss cantons are widely used, e.g. on car license plates and in the ISO 3166-2 codes (with the prefix "CH-", i.e. CH-SZ for the canton of Schwyz).

All content from Kiddle encyclopedia articles (including the article images and facts) can be freely used under Attribution-ShareAlike license, unless stated otherwise. Cite this article:
Cantons of Switzerland Facts for Kids. Kiddle Encyclopedia.