Glarus is a canton in east Switzerland. The capital is Glarus. In 2010, the 25 communes were merged to only three: Glarus, Glarus Nord, and Glarus Süd. Officially, Glarus is a German-speaking canton; of the roughly 40.000 people, 83.6 percent are German-speaking, and 6.8 percent speak Italian. According to a statistical survey done in 2000, 44% of the population are Protestant (including Jehovas Witnesses, and the New Apostolic Church), 37.3% are Roman Catholic, 6.5% are Muslims, 6.5% are non-believers, 2.3% are either Eastern orthodox or Oriental orthodox and 3.7% belonged to other communities or did not say. 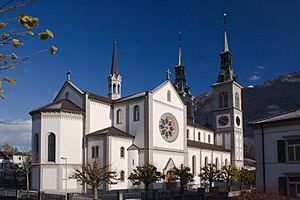 Church of Glarus by Ferdinand Stadler

The history of this canton is dominated by religion. The people who lived in the Linth Valley were converted to Christianity in the 6th century by the Irish monk Saint Fridolin. He is still in the coat of arms of the canton today. He started Säckingen Abbey near Basel. The area around Glarus was owned by the abbey starting in the 9th century. By 1288, the Habsburgs slowly took over all the abbey's rights. Then the people of Glarus joined the Swiss Confederation in 1352.

Between 1506 and 1516, the reformer Huldrych Zwingli was a priest in Glarus. By 1564, all of Zwingli's followers were eliminated, but the Protestants and Catholics there still fought with each other. To make peace it was decided that each side should have its own assembly (Landsgemeinde) in 1623. In 1683, each side was granted the right to have its own tribunals.

Between 1798 and 1803, Glarus was part of the Canton of Linth made by Napoleon. In 1836 the constitution was changed to unite the assemblies and establish only one Landsgemeinde.

About two thirds of Glarus (593 buildings) were destroyed after a big fire in 1861. After the fire, Glarus was rebuilt in block fashion according to construction plans by Bernhard Simon and Johann Caspar Wolff.

The land of the canton helped to make slate works in the 1600s.

The 25 municipalities (gemeinden) were:

All content from Kiddle encyclopedia articles (including the article images and facts) can be freely used under Attribution-ShareAlike license, unless stated otherwise. Cite this article:
Glarus (canton) Facts for Kids. Kiddle Encyclopedia.