Canton Jura is in northwest Switzerland. It includes parts of the Jura mountains in the south and the Jura plateau in the north. The Jura plateau is hilly and almost entirely limestone. To the north and the west of Jura is France. The canton of Solothurn and Basel-Landschaft are east of Jura, while the canton of Bern is south of Jura. The River Doubs and the river Birs drain the lands.

Agriculture is important in Canton Jura. Cattle breeding is significant and there is also horse breeding. The main industries are watches, clothing and tobacco. There are a growing number of small and middle-sized businesses. The people are almost fully French-speaking. The majority is Roman Catholic.

The king of Burgundy donated much of the land that today makes up Canton Jura to the Bishop of Basel in 999. The area was a sovereign state within the Holy Roman Empire for more than 800 years. After the Treaty of Westphalia in 1648 the Jura had close ties with the Swiss Confederation. In the Congress of Vienna the Jura was given to the Canton Bern. This act caused disagreements. The Jura was French-speaking and Roman Catholic, whereas the canton of Bern was mostly German-speaking and Protestant.

The people of the Jura region called for independence. After a long struggle, a constitution was accepted in 1977. In 1978 the split was made official when the Swiss people voted in favour of it, and in 1979 the Jura joined the Swiss Confederation as a full member. However, the southern part of the Jura region opted not to join the newly-formed canton, and instead remained part of Bern. This area is now known as Bernese Jura. The word Jura, therefore, may refer either to Canton Jura, or to the combined territory of Canton Jura and Bernese Jura. 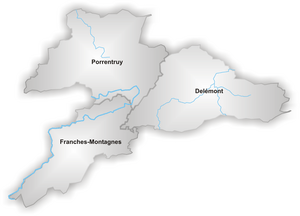 Districts in the canton of Jura

Jura is divided into 3 districts:

All content from Kiddle encyclopedia articles (including the article images and facts) can be freely used under Attribution-ShareAlike license, unless stated otherwise. Cite this article:
Jura (canton) Facts for Kids. Kiddle Encyclopedia.