Jura is a department in the east of France. It is named after the Jura mountains (not to be confused with the Swiss canton of Jura).

As early as the 13th century, inhabitants of the southern 2/3 of Jura spoke a dialect of Arpitan language. It continued to be spoken in rural areas into the 20th century.

Jura is one of the original 83 departments created during the French Revolution on March 4, 1790. It was created from part of the former province of Free County. The departments of Jura, Doubs, Haute-Saône, Saône-et-Loire, Territoire de Belfort, and Yonne form the modern Bourgogne-Franche-Comté region of France. The prefecture (capital) is Lons-le-Saunier. 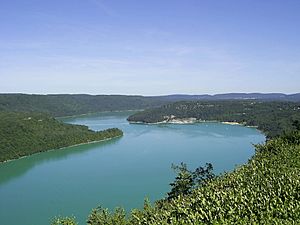 Jura is in the Bourgogne-Franche-Comté region. The French departments of Doubs, Haute-Saône, Côte-d'Or, Saône-et-Loire, and Ain, are next to it. The Swiss canton of Vaud is to the east.

The Jura mountains are wooded and rolling, not craggy and rocky like the Alps.

Many lakes can be found throughout the Jura. The largest natural lake is called Lac De Chalain. It is 3km long and 1km wide. Lac de Vouglans was formed after the building of a hydro-electric dam. It is one of the largest man-made lakes in France.

The climate of the Jura varies greatly by elevation. The lower valleys are temperate and pleasant, but the high mountain valleys have bitterly cold winters.

Jura is a wine-growing region. The Jura wines are very distinctive and unusual wines, such as vin jaune, which is made by a similar process to sherry. It develops under a flor of yeast. This is made from the local Savagnin grape variety. Other grape varieties include Poulsard, Trousseau, and Chardonnay. 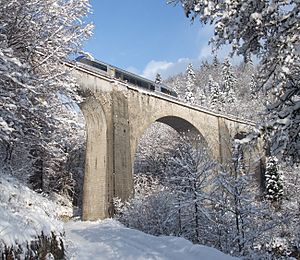 Train on the Saillard bridge, Jura

All content from Kiddle encyclopedia articles (including the article images and facts) can be freely used under Attribution-ShareAlike license, unless stated otherwise. Cite this article:
Jura (department) Facts for Kids. Kiddle Encyclopedia.