Côte-d'Or (literally, "Slope of Gold", "Golden Slope") is a department in the eastern France. It is one of the 83 first French departments made during the French revolution and one of the eight departments of the Bourgogne-Franche-Comté region.

Côte-d'Or is one of the original 83 departments created during the French Revolution on 4 March 1790. It was formed from part of the old province of Burgundy. It was divided in seven districts: Arnay-le-Duc, Beaune, Châtillon-sur-Seine, Dijon, Is-sur-Tille, Saint-Jean-de-Losne and Semur-en-Auxois.

In 1800, with the creation of the arrondissements in France, the seven districts were changed into four arrondissements: Dijon, Beaune, Châtillon-sur-Seine and Semur-en-Auxois. 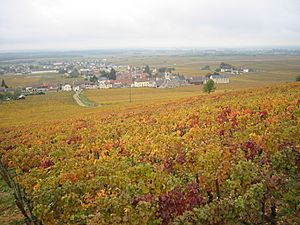 Morey-Saint-Denis in autumn. The department is named after this kind of landscape.

Côte-d'Or is the only French department who was not named after a geographical feature: a river, a mountain, and so on. The name was chosen by Charles-André-Rémy Arnoult, member of the National Constituent Assembly of 1789, who suggested the name, inspired by the golden hue that took the vineyards of the region in the autumn.

The French word côte means, in this case, a slope that geologists usually name with the Spanish word cuesta.

Côte-d'Or is part of the region of Bourgogne-Franche-Comté. The department borders with 7 departments that are part of 2 regions:

The main rivers of Côte-d'Or are:

The Köppen climate classification type for the climate at Dijon is an "Oceanic climate" (also known as Maritime Temperate climate) and of the subtype "Cfb".

In the Plateau de Langres, winters are long and cold with frequent frosts.

The department is managed by the Departmental Council of Côte-d'Or in Dijon. Côte-d'Or is part of the region of Bourgogne-Franche-Comté.

There are 3 arrondissements (districts), 23 cantons and 704 communes (municipalities) in Côte-d'Or.

The following is a list of the 23 cantons of the Côte-d'Or department (with their INSEE codes), following the French canton reorganisation which came into effect in March 2015:

Evolution of the population in Côte-d'Or

All content from Kiddle encyclopedia articles (including the article images and facts) can be freely used under Attribution-ShareAlike license, unless stated otherwise. Cite this article:
Côte-d'Or Facts for Kids. Kiddle Encyclopedia.