Haute-Marne is a department in the northeast of France named after the Marner river. It is in the Grand Est region and its prefecture (capital) is the city of Chaumont.

Charles de Gaulle lived until his death in Colombey-les-Deux-Églises.

Haute-Marne is one of the original 83 departments created during the French Revolution on 4 March 1790 with Chaumont as is capital. It was formed with parts of the former provinces of Champagne, Burgundy, Lorraine and Franche-Comté.

It was divided in six districts: Bourbonne, Bourmont, Chaumont, Joinville, Langres and Saint-Dizier.

The Haute-Marne department is in the Grand Est region. It is bordered by 6 departments in two regions:

The main river is the Marne river; it starts in the Langres plateau and flows through 120 km (75 mi) in the department.

This area is characterized by climates with few extremes of temperature. The Köppen climate classification type for the climate at Saint-Dizier is a "Marine West Coast Climate" and of the subtype "Cfb".

Haute-Marne is managed by the Departmental Council of Haute-Marne in Chaumont. The department is part of the Grand Est region.

There are 5 arrondissements (districts), 23 cantons and 427 communes (municipalities) in Haute-Marne.

The following is a list of the 17 cantons of the Haute-Marne department (with their INSEE codes), following the French canton reorganisation which came into effect in March 2015:

The inhabitants of the Haute-Marne department are known, in French, as Haut-Marnais (women: Haut-Marnaises),

Evolution of the population in Haute-Marne 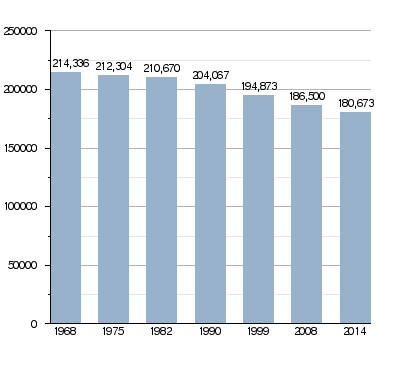 The communes with more inhabitants in the Haute-Marne department are:

All content from Kiddle encyclopedia articles (including the article images and facts) can be freely used under Attribution-ShareAlike license, unless stated otherwise. Cite this article:
Haute-Marne Facts for Kids. Kiddle Encyclopedia.