General Charles André Joseph Marie de Gaulle, better known as Charles de Gaulle (22 November 1890 - 9 November 1970), was a French military and political leader. He was president of France from 1959 to 1969, and was a founding member and leader of the French Resistance during World War II.

His reputation as the strongest and greatest of French leaders since Napoleon continues into the 21st century.

Charles fought in both World War I and World War II. He began his military career after he graduated from Ecole Militaire de Saint-Cyr (famous French military college). In 1912, he joined the army's infantry. He was captured during the Battle of Verdun during World War I and was sent home after the armistice. Charles remained in the military after the war ended and supported new battle ideas. These ideas included mechanized troops (troops that travel in armored machines like tanks) and specialized armored divisions of the army. 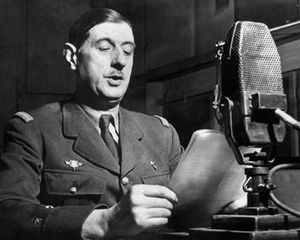 After World War II began, de Gaulle formed and led the Free French Forces movement. He did this because he did not think that France should surrender to Germany, part of the Axis forces. Charles de Gaulle thought that France should keep fighting. As the French government surrendered to Germany, de Gaulle fled to Britain. He set up his own French government there and called it Free France. He gained support and gathered French troops that would eventually help liberate, or free, France from Germany's power.

After the war de Gaulle retired as President of the temporary government in 1946. In 1958 he came out of retirement and was elected President of France - a position to which he was reelected in 1965 and held until his resignation in 1969.

While de Gaulle was president, France recovered from the war and had great economic success.

He also granted independence to Algeria and the African colonies.

De Gaulle resigned from his presidency in April of 1969 after some of his ideas and proposals were not supported by many people in France. He returned home to his estate in Colombey-les-Deux-Églises, where he passed away just two weeks before his 80th birthday.

All content from Kiddle encyclopedia articles (including the article images and facts) can be freely used under Attribution-ShareAlike license, unless stated otherwise. Cite this article:
Charles de Gaulle Facts for Kids. Kiddle Encyclopedia.