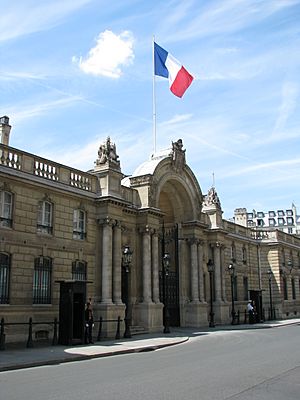 Élysée Palace with Republican Guards at the gate.

The Élysée Palace (French: Palais de l'Élysée) is the official residence of the French president. It is in Paris, in the 8th arrondissement, near the Champs-Élysées. The building is under protection of a unit of the famous Republican Guard. It was built between 1718 and 1722.

All content from Kiddle encyclopedia articles (including the article images and facts) can be freely used under Attribution-ShareAlike license, unless stated otherwise. Cite this article:
Elysée Palace Facts for Kids. Kiddle Encyclopedia.