The Avenue des Champs-Élysées is an avenue in the 8th arrondissement of Paris, France, 1.9 kilometres (1.2 mi) long and 70 metres (230 ft) wide, running between the Place de la Concorde and the Place Charles de Gaulle, where the Arc de Triomphe is located. It is known for its theatres, cafés, and luxury shops, for the annual Bastille Day military parade, and as the finish of the Tour de France cycling race.

The name is French for the Elysian Fields, the place for dead heroes in Greek mythology. Champs-Élysées is widely regarded to be one of the most recognisable avenues in the world.

The avenue runs for 1.91 km (1.19 mi) through the 8th arrondissement in northwestern Paris, from the Place de la Concorde in the east, with the Obelisk of Luxor, to the Place Charles de Gaulle (formerly the Place de l'Étoile) in the west, location of the Arc de Triomphe. The Champs-Élysées forms part of the Axe historique.

The lower part of the Champs-Élysées, from the Place de la Concorde to the Rond-Point, runs through the Jardin des Champs-Élysées, a park which contains the Grand Palais, the Petit Palais, the Théâtre Marigny, and several restaurants, gardens and monuments. The Élysée Palace—official residence of the President of the French Republic—borders the park, but is not on the Avenue itself. The Champs-Élysées ends at the Arc de Triomphe, built to honour the victories of Napoleon Bonaparte.

The Champs-Élysées was originally fields and market gardens, until 1616, when Marie de Medici decided to extend the axis of the Tuileries Garden with an avenue of trees. As late as 1716, Guillaume Delisle's map of Paris shows that a short stretch of roads and fields and market garden plots still separated the grand axe of the Tuileries gardens from the planted "Avenue des Thuilleries," stretches west from a newly-cleared Place du Pont Tournant soon to be renamed for Louis XV and now the Place de la Concorde.

By the late 18th century, the Champs-Élysées had become a fashionable avenue; the bosquet plantings on either side had thickened enough to be given formal rectangular glades (cabinets de verdure). The gardens of houses built along the Faubourg Saint-Honoré backed onto the formal bosquets. The grandest of them was the Élysée Palace. A semicircle of house-fronts now defined the north side of the Rond-Point. Queen Marie Antoinette drove with her friends and took music lessons at the grand Hôtel de Crillon on the Place Louis XV. The avenue from the Rond-Point to the Étoile was built up during the Empire. The Champs-Élysées itself became city property in 1828, and footpaths, fountains, and gas lighting were added. Over the years, the avenue has undergone numerous transitions, most recently in 1994, when the sidewalks were widened.

The Avenue des Champs-Élysées, because of its size and proximity to several Parisian landmarks such as the Arc de Triomphe, has been the site of several notable military parades, the most infamous being the march of German troops celebrating the Fall of France on 14 June 1940, and the two most famous, the subsequent marches of Free French and American forces after the liberation of the city, respectively, the French 2nd Armored Division on 26 August 1944, and the US 28th Infantry Division on 29 August 1944. 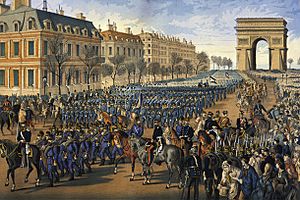 Every year on Bastille Day on 14 July, the largest military parade in Europe passes down the Champs-Élysées, reviewed by the President of the Republic.

Every year during Advent, Christmastide, and Epiphany, the 'Champs-Élysées' Committee contribute for the holidays seasons lighting of the Champs-Élysées. This generally occurs from late November until early January.

Since 1975, the last stage of the Tour de France cycling race has finished on the Champs-Élysées. The subsequent awards ceremony also takes place directly on the avenue.

Paris Métro Line 1 runs under the Champs-Élysées. Station Charles de Gaulle – Étoile is at the street's west end, and there are three stations with entrances on the street itself; from west to east these are: George V by the Hôtel George-V, Franklin D. Roosevelt at the rond-point des Champs-Élysées, Champs-Élysées – Clemenceau at place Clemenceau and Concorde at the southern end of the avenue, where the Place de la Concorde is located.

All content from Kiddle encyclopedia articles (including the article images and facts) can be freely used under Attribution-ShareAlike license, unless stated otherwise. Cite this article:
Champs-Élysées Facts for Kids. Kiddle Encyclopedia.