Konrad Hermann Joseph Adenauer (5 January 1876 – 19 April 1967) was a German statesman who served as the first Chancellor of the Federal Republic of Germany (West Germany) from 1949 to 1963. He was co-founder and first leader of the Christian Democratic Union (CDU) (until 1966), a Christian Democratic party that under his leadership became one of the most influential parties in the country. As party leader he worked closely with the United States (which had a large army stationed in West Germany).

In the early years of the Federal Republic he switched focus from denazification to recovery and led his country from the ruins of World War II to becoming a productive and prosperous nation that forged close relations with France, the United Kingdom and the United States. During his years in power, West Germany achieved democracy, stability, international respect and economic prosperity From 1949 to 1963 he was the first Bundeskanzler (chancellor) of the Federal Republic of Germany and from 1951 to 1955 was foreign secretary the same time. He made sure West Germany joined the side of the western capitalist countries in the Cold War. He also helped West Germany join NATO. He was re-elected three times.

A devout Roman Catholic and member of the Catholic Centre Party, he was a leading politician in the Weimar Republic, serving as Mayor of Cologne (1917–1933) and as president of the Prussian State Council (1922–1933).

Adenauer was member of the Catholic Zentrum Party. When the Nazi Party took power he lost his job. At first he worked with the Nazis, but after the conspiracy to kill Hitler failed in 1944 he hid for his own safety.

In the Parlamentarischer Rat of West Germany, he was one of the top politicians and the President. He founded the CDU at the same time. He was important in making Bonn the West German capital instead of Frankfurt am Main.

Adenauer, who was Chancellor until age 87, was dubbed "Der Alte" ("the elder"). British politician and historian Roy Jenkins says he was "the oldest statesman ever to function in elected office." He remains the oldest head of government for a major country. He was a member of the Bundestag until his death at 91 years old. 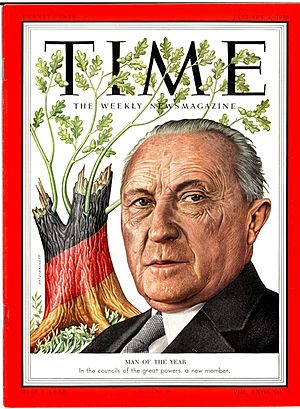 Man of the Year: Adenauer on the cover of Time Magazine (4 January 1954)

Konrad Adenauer was born as the third of five children in Cologne, Rhenish Prussia on 5 January 1876. One of the formative influences of Adenauer's youth was the Kulturkampf, an experience that as related to him by his parents left him with a lifelong dislike for "Prussianism", and led him like many other Catholic Rhinelanders of the 19th century to deeply resent the Rhineland's inclusion in Prussia.

In 1894, he completed his Abitur and began studying law and politics at the universities of Freiburg, Munich and Bonn. In 1896, at the age of 20, he was conscripted into the German army, but did not pass the physical exam due to chronic respiratory problems he had experienced since childhood.

He was a member of several Roman Catholic students' associations in Bonn. He graduated in 1900, and afterwards worked as a lawyer at the court in Cologne. 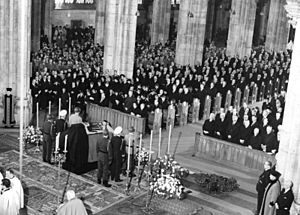 Adenauer died on 19 April 1967 in his family home at Rhöndorf. According to his daughter, his last words were "Da jitt et nix zo kriesche!" (Cologne dialect for "There's nothin' to weep about")

Konrad Adenauer's state funeral in Cologne Cathedral was attended by a large number of world leaders, among them United States President Lyndon B. Johnson, Charles de Gaulle and Heinrich Lübke.

After the Requiem Mass and service, his remains were taken upstream to Rhöndorf on the Rhine aboard Kondor, with two more Seeadler-class fast attack craft of the German Navy, Seeadler and Sperber as escorts, "past the thousands who stood in silence on both banks of the river".

He is interred at the Waldfriedhof ("Forest Cemetery") at Rhöndorf. 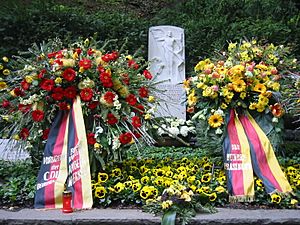 When, in 1967, after his death at the age of 91, Germans were asked what they admired most about Adenauer, the majority responded that he had brought home the last German prisoners of war from the USSR, which had become known as the "Return of the 10,000".

In 2003, Adenauer was voted the 'greatest German of all time' in a contest called Unsere Besten run on German public-service television broadcaster ZDF in which more than three million votes were cast.

All content from Kiddle encyclopedia articles (including the article images and facts) can be freely used under Attribution-ShareAlike license, unless stated otherwise. Cite this article:
Konrad Adenauer Facts for Kids. Kiddle Encyclopedia.