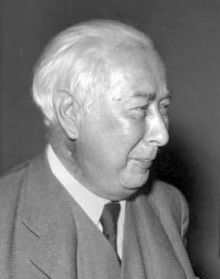 Prof. Dr. Theodor Heuss (born 31 January 1884 in Brackenheim; died 12 December 1963 in Stuttgart) was a German politician. He was the first person elected to a regular term as President of the Federal Republic of Germany.

Heuss was born in Brackenheim, near Heilbronn. He studied art history and state studies in Munich and Berlin. He received his doctorate in 1905 in Munich. In 1908 he married Elly Heuss-Knapp (1881-1952). He worked for a political magazine from 1908 to 1912, and then for a regional newspaper. In 1910 he joined the Progressive People's Party and stayed there until 1918. Between 1923 and 1926 he published the magazine Die Deutsche Nation ("The German Nation"). Heuss became a member of the German Democratic Party (Deutsche Demokratische Partei, DDP) and was a member of parliament for two periods.

In 1933 Heuss voted for the Enabling Act (Ermächtigungsgesetz) against his personal beliefs, following his party. After World War II Heuss was the first Minister of Culture in Baden-Württemberg. He was one of the founders of the Free Democratic Party of Germany after WW II.

In 1949 he was elected as first President of the Federal Republic of Germany. He was reelected once.

All content from Kiddle encyclopedia articles (including the article images and facts) can be freely used under Attribution-ShareAlike license, unless stated otherwise. Cite this article:
Theodor Heuss Facts for Kids. Kiddle Encyclopedia.