Kurt Ernst Carl Schumacher (13 October 1895 – 20 August 1952) was a German social democratic politician, who served as chairman of the Social Democratic Party of Germany from 1946 and was the first Leader of the Opposition in the West German Bundestag from 1949 until his death in 1952.

An opponent of Chancellor Konrad Adenauer's government, but an even stronger opponent of the East German Socialist Unity Party and communism in general, he was one of the founding fathers of post-war German democracy.

He was also a noted opponent of the far-right and the far-left, i.e. the Nazi Party and the Communist Party of Germany, during the Weimar Republic, and is famous for his description of the communists as "red-painted Nazis." He spent over ten years in Nazi concentration camps, where he was severely mistreated.

Kurt Schumacher was born in Kulm in West Prussia (now Chełmno in Poland), the son of a small businessman, member of the liberal German Free-minded Party and deputy in the municipal assembly.

The young man was a brilliant student, but when the First World War broke out in 1914 he immediately abandoned his studies and joined the German Army. In December, at Bielawy west of Łowicz in Poland, he was so badly wounded that his right arm had to be amputated. After contracting dysentery, he was finally discharged from the army and was decorated with the Iron Cross 2nd class.

He returned to his law and politics studies in Halle, Leipzig and Berlin, where he graduated in 1919. 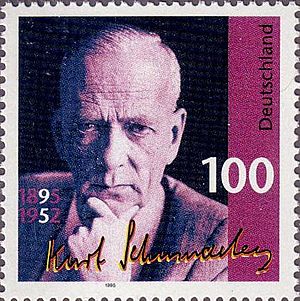 After the World War II, Schumacher put the SPD back together. He was first chief of the Social democrats in West Germany after the WWII. He was also their first speaker in the federal parliament (Bundestag) and first leader of opposition in the Bundestag.

All content from Kiddle encyclopedia articles (including the article images and facts) can be freely used under Attribution-ShareAlike license, unless stated otherwise. Cite this article:
Kurt Schumacher Facts for Kids. Kiddle Encyclopedia.