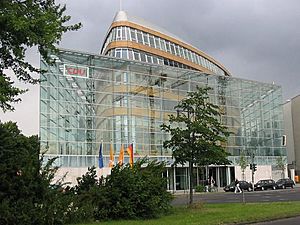 The Christian Democratic Union of Germany or Christlich Demokratische Union Deutschlands (CDU) is one of the two main right of centre political parties in Germany. It describes itself as a Christian democratic, liberal and conservative party of the centre.

In November 2005 the Federal leader of the CDU Dr. Angela Merkel became the Chancellor of the Federal Republic of Germany.

The CDU was founded after World War II. The first German Chancellor was Konrad Adenauer, a member of the CDU. He ruled from 1949-1963. During the Government of Helmut Kohl (1982-1998), Germany was reunited.

The CDU was the Government Party for most of the younger German history, only from 1969-1982 and from 1998-2005 there have been Chancellors from different parties.

All content from Kiddle encyclopedia articles (including the article images and facts) can be freely used under Attribution-ShareAlike license, unless stated otherwise. Cite this article:
Christian Democratic Union of Germany Facts for Kids. Kiddle Encyclopedia.