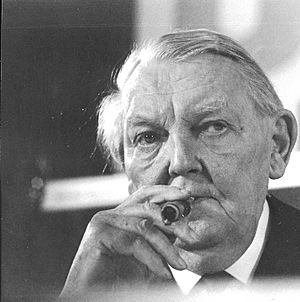 Erhard was born as the son of a salesman. After his middle school exam, he started training to become a salesman himself. He was wounded as soldier in World War I. After World War I, he started to study micro economy at a college in Nuremberg.

After that, he studied economy on the University of Frankfurt am Main. In 1925 he finished his doctoral thesis. Afterwards, he worked in his father's company. After the Great Depression, the company went bankrupt. From 1928 to 1942, he worked as science assistant, but he could not get a promotion because he did not want to become a member of a Nazi organisation. From 1942 to 1945, he was the head of the institute for industrial research.

Until 1949, he worked for the CDU, but joined still in 1963. From 1945 to 1946, he worked for the provisional government of Bavaria, afterwards he was an economic organisation official for the British-American administration in West Germany.

In 1949, he became Minister of Economics under Konrad Adenauer. From 1957-1963, he was Vice Chancellor. After Adenauer resigned in 1963, Erhard became the new chancellor. In 1966, Kurt Georg Kiesinger succeeded him.

All content from Kiddle encyclopedia articles (including the article images and facts) can be freely used under Attribution-ShareAlike license, unless stated otherwise. Cite this article:
Ludwig Erhard Facts for Kids. Kiddle Encyclopedia.