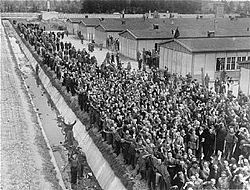 Dachau concentration camp was the first World War II Nazi concentration camp. It was built in 1933 by Heinrich Himmler. The original purpose was to hold political prisoners. Dachau camp was located on the grounds of an old munitions factory. It was southeast of the medieval town of Dachau, about 16 km (10 mi) northwest of Munich in the state of Bavaria, in southern Germany.

The camp's purpose was enlarged to include forced labor and housed ordinary German and Austrian criminals. Eventually foreign nationals from countries that Germany occupied or invaded were sent here. It became a death camp for Jews. Countless thousands of Jews died were executed or died of starvation, disease or overwork. The Dachau camp system grew to include nearly 100 sub-camps. These were mostly work camps or Arbeitskommandos, and were located throughout southern Germany and Austria. The camps were liberated by U.S. forces in the spring of 1945.

Estimates of the number of people who died here vary widely. Complete records of how many died at Dachau do not exist. Three weeks before the United States Army reached the camp, most of the important records were removed or burned. A few days before the Americans arrived, Germans began evacuating prisoners. But poor organization prevented all from being removed. Prisoners from the Buchenwald concentration camp had been sent to Dachau. When the last train was found, 2,000 of the 4,000 prisoners on it were dead. Between 1933 and the liberation by Americans in 1945, about 228,930 prisoners had been sent to Dachau. This includes about 7,000 who had just arrived from Buchenwald. This number is close to that given by a US Seventh Army report of 229,000. 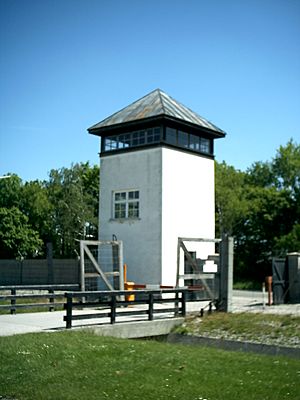 All content from Kiddle encyclopedia articles (including the article images and facts) can be freely used under Attribution-ShareAlike license, unless stated otherwise. Cite this article:
Dachau concentration camp Facts for Kids. Kiddle Encyclopedia.