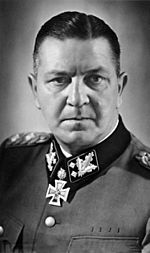 Theodor Eike (October 17, 1892 in Hampont – February 26, 1943 near Kharkov) was an Obergruppenführer of the SS and General of the Waffen-SS.

He was the commander of the concentration camp of Dachau. During the World War II was he the leader of the Totenkopf Division.

All content from Kiddle encyclopedia articles (including the article images and facts) can be freely used under Attribution-ShareAlike license, unless stated otherwise. Cite this article:
Theodor Eicke Facts for Kids. Kiddle Encyclopedia.