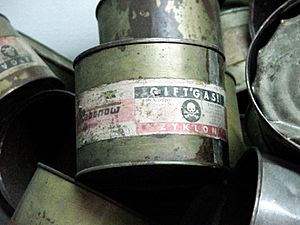 IG Farben (short for Interessen-Gemeinschaft Farbenindustrie AG), was a German conglomerate of companies formed in 1925 – including BASF, AGFA and Hoechst – and even earlier during World War I. Farben is German for "paints", "dyes", or "colors", and initially many of these companies produced dyes, but soon began to embrace more advanced chemistry. The founding of IG Farben was a reaction to Germany's defeat in World War I. IG Farben held a near total monopoly on chemical production, later during the Nazi regime, including manufacturing Zyklon B.

All content from Kiddle encyclopedia articles (including the article images and facts) can be freely used under Attribution-ShareAlike license, unless stated otherwise. Cite this article:
IG Farben Facts for Kids. Kiddle Encyclopedia.