Night of the Long Knives facts for kids 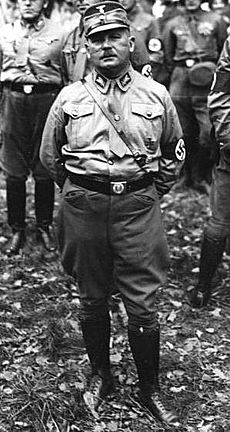 The Night of the Long Knives (German: ) or "Operation Hummingbird" (Kolibri), was a purge that took place in Nazi Germany between 30 June and 2 July 1934, when the Nazi regime executed at least 90 people for political reasons. Most of those killed were members of the "Storm Troopers" (SA) (German: Sturmabteilung).

Adolf Hitler moved against the SA and its leader, Ernst Röhm, because he saw the independence of the SA and the penchant of its members for street violence as a direct threat to his power. Hitler also wanted to forestall any move by leaders of the Reichswehr, the German military, who both feared and despised the SA, to curtail his rule, especially since Röhm made no secret of his ambition to absorb the Reichswehr with himself at its head. Finally, Hitler used the purge to go against conservative critics of his regime, especially those loyal to Vice-Chancellor Franz von Papen, and to settle scores with old enemies, such as Kurt von Schleicher.

All content from Kiddle encyclopedia articles (including the article images and facts) can be freely used under Attribution-ShareAlike license, unless stated otherwise. Cite this article:
Night of the Long Knives Facts for Kids. Kiddle Encyclopedia.