Kurt Ferdinand Friedrich Hermann von Schleicher (7 April 1882 – 30 June 1934) was a German general and the last Chancellor of Germany during the Weimar Republic. A rival for power with Adolf Hitler, Schleicher was murdered by Hitler's SS during the Night of the Long Knives in 1934. 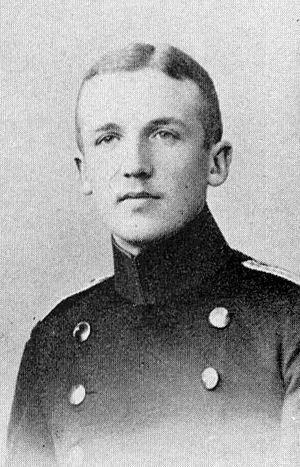 Schleicher was born into a military family in Brandenburg an der Havel. Entering the Prussian Army as a lieutenant in 1900, he rose to become a General Staff officer in the Railway Department of the German General Staff and served in the General Staff of the Supreme Army Command during World War I.

Schleicher served as liaison between the Army and the new Weimar Republic during the German Revolution of 1918–19. An important player in the Reichswehr's efforts to avoid the restrictions of the Treaty of Versailles, Schleicher rose to power as head of the Reichswehr's Armed Forces Department and close advisor to President Paul von Hindenburg from 1926 onward.

In 1928, Schleicher became head of the Defense Ministry's Office of Ministerial Affairs (Ministeramt) in 1929. In 1930 he was instrumental in the toppling of Hermann Müller's government and the appointment of Heinrich Brüning as Chancellor. He enlisted the services of the SA as an auxiliary force for the Reichswehr from 1931 onward.

Beginning in 1932 he served as Minister of Defense in the cabinet of Franz von Papen and was the prime mover behind the Preußenschlag coup against the Social Democratic government of Prussia. 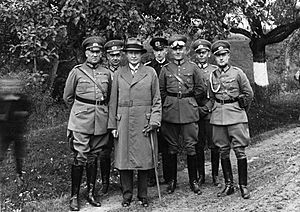 Schleicher (left) with Groener and other officers in 1930

During his brief term, Schleicher negotiated with Gregor Strasser on a possible secession from the Nazi Party but their scheme failed. Schleicher attempted to "tame" Hitler into cooperating with his government by threatening him with an anti-Nazi alliance of parties, the so-called Querfront ("cross-front"). Hitler refused to abandon his claim to the chancellorship and Schleicher's plan failed.

On 28 January 1933, facing a political impasse and deteriorating health, Schleicher resigned and recommended the appointment of Hitler in his stead. Schleicher sought to return to politics by exploiting the divisions between Ernst Röhm and Hitler but on 30 June 1934 he and his wife Elisabeth were murdered on the orders of Hitler during the Night of the Long Knives.

All content from Kiddle encyclopedia articles (including the article images and facts) can be freely used under Attribution-ShareAlike license, unless stated otherwise. Cite this article:
Kurt von Schleicher Facts for Kids. Kiddle Encyclopedia.