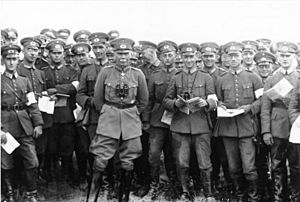 General Hans von Seeckt, Chief of the Reichswehr together with infantry men at a Reichswehr manoeuvre in Thuringia, 1926 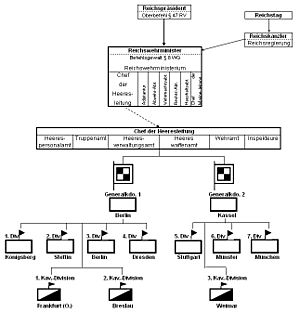 The Reichswehr (English: Realm Defence) formed the military organisation of Germany from 1919 until 1935, when it was united with the new Wehrmacht (Defence Force).

At the end of World War I, the forces of the German Empire were disbanded, the men returning home individually or in small groups. Many of them joined the Freikorps (Free Corps), a collection of volunteer paramilitary units that were involved in suppressing the German Revolution and border clashes between 1918 and 1923.

The Reichswehr was limited to a standing army of 100,000 men, and a navy of 15,000. The establishment of a general staff was prohibited. Heavy weapons such as artillery above the calibre of 105 mm (for naval guns, above 205 mm), armoured vehicles, submarines and capital ships were forbidden, as were aircraft of any kind. Compliance with these restrictions was monitored until 1927 by the Military Inter-Allied Commission of Control.

On 30 September 1919, the army was reorganised as the Übergangsheer (Transitional Army), and the force size was reduced to 20 brigades. About 400,000 men were left in the armed forces, and in May 1920 it further was downsized to 200,000 men and restructured again, forming three cavalry divisions and seven infantry divisions. On 1 October 1920 the brigades were replaced by regiments and the manpower was now only 100,000 men as stipulated by the Treaty of Versailles. This lasted until 1 January 1921, when the Reichswehr was officially established according to the limitations imposed by the Treaty of Versailles (Articles 159 to 213).

The Reichswehr was a unified organisation composed of the following (as was allowed by the Versailles Treaty): 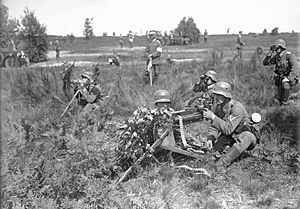 Despite the limitations on its size, their analysis of the loss of World War I, research and development, secret testing abroad (in co-operation with the Red Army) and planning for better times went on. In addition, although forbidden to have a General Staff, the army continued to conduct the typical functions of a general staff under the disguised name of Truppenamt (Troop Office). During this time, many of the future leaders of the Wehrmacht – such as Heinz Guderian – first formulated the ideas that they were to use so effectively a few years later.

All content from Kiddle encyclopedia articles (including the article images and facts) can be freely used under Attribution-ShareAlike license, unless stated otherwise. Cite this article:
Reichswehr Facts for Kids. Kiddle Encyclopedia.