Historically, cavalry have been soldiers who fought while riding horses. In modern times, "cavalry" means the fast branch of the military, as opposed to the slower infantry (soldiers on foot). 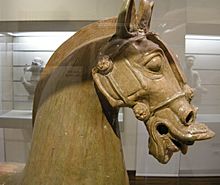 All content from Kiddle encyclopedia articles (including the article images and facts) can be freely used under Attribution-ShareAlike license, unless stated otherwise. Cite this article:
Cavalry Facts for Kids. Kiddle Encyclopedia.