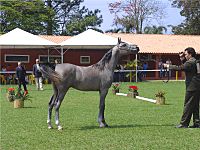 The Arabian horse is a breed famous for beauty and stamina. It is one of the oldest horse breeds in the world. Arabian horses are bred with horses of other breeds to add speed, beauty, endurance, and strong bones. Today, Arabian ancestors are found in almost every breed of riding horse.

The Arabian horse developed in the deserts of Arabia by the Bedouin people. People sometimes brought their horses into family tent for shelter and protection. This close relationship with humans made the Arabian a horse with a kind temper and quick to learn. It also was used as a war horse. This meant that it needed speed and to be very alert. This blend of traits makes it necessary for people today to treat Arabian horses with kindness and respect. 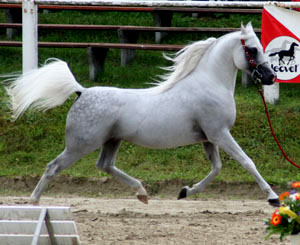 Arabian horses have refined, wedge-shaped heads, a broad forehead, large eyes, large nostrils, and small muzzles. Most display a distinctive concave, or "dished" profile. Many Arabians also have a slight forehead bulge between their eyes, called the jibbah by the Bedouin, that adds additional sinus capacity, believed to have helped the Arabian horse in its native dry desert climate. Another breed characteristic is an arched neck with a large, well-set windpipe set on a refined, clean throatlatch. This structure of the poll and throatlatch was called the mitbah or mitbeh by the Bedouin. In the ideal Arabian it is long, allowing flexibility in the bridle and room for the windpipe.

Other distinctive features are a relatively long, level croup, or top of the hindquarters, and naturally high tail carriage. The USEF breed standard requires Arabians have solid bone and standard correct equine conformation. Well-bred Arabians have a deep, well-angled hip and well laid-back shoulder. Within the breed, there are variations. Some individuals have wider, more powerfully muscled hindquarters suitable for intense bursts of activity in events such as reining, while others have longer, leaner muscling better suited for long stretches of flat work such as endurance riding or horse racing. Most have a compact body with a short back. Arabians usually have dense, strong bone, and good hoof walls. They are especially noted for their endurance, and the superiority of the breed in Endurance riding competition demonstrates that well-bred Arabians are strong, sound horses with superior stamina. At international FEI-sponsored endurance events, Arabians and half-Arabians are the dominant performers in distance competition.

The breed standard stated by the United States Equestrian Federation, describes Arabians as standing between 14.1 to 15.1 hands (57 to 61 inches, 145 to 155 cm) tall, "with the occasional individual over or under." Thus, all Arabians, regardless of height, are classified as "horses", even though 14.2 hands (58 inches, 147 cm) is the traditional cutoff height between a horse and a pony. A common myth is that Arabians are not strong because they are relatively small and refined. However, the Arabian horse is noted for a greater density of bone than other breeds, short cannons, sound feet, and a broad, short back, all of which give the breed physical strength comparable to many taller animals. Thus, even a smaller Arabian can carry a heavy rider. For tasks where the sheer weight of the horse matters, such as farm work done by a draft horse, any lighter-weight horse is at a disadvantage. However, for most purposes, the Arabian is a strong and hardy light horse breed able to carry any type of rider in most equestrian pursuits. 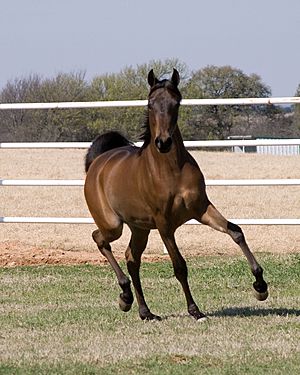 Arabians are noted for both intelligence and a spirited disposition

For centuries, Arabian horses lived in the desert in close association with humans. For shelter and protection from theft, prized war mares were sometimes kept in their owner's tent, close to children and everyday family life. Only horses with a naturally good disposition were allowed to reproduce, with the result that Arabians today have a good temperament that, among other examples, makes them one of the few breeds where the United States Equestrian Federation rules allow children to exhibit stallions in nearly all show ring classes, including those limited to riders under 18.

On the other hand, the Arabian is also classified as a "hot-blooded" breed, a category that includes other refined, spirited horses bred for speed, such as the Akhal-Teke, the Barb and the Thoroughbred. Like other hot-bloods, Arabians' sensitivity and intelligence enable quick learning and greater communication with their riders; however, their intelligence also allows them to learn bad habits as quickly as good ones, and they do not tolerate inept or abusive training practices. Some sources claim that it is more difficult to train a "hot-blooded" horse. Though most Arabians have a natural tendency to cooperate with humans, when treated badly, like any horse, they can become excessively nervous or anxious, but seldom become vicious unless seriously spoiled or subjected to extreme abuse. At the other end of the spectrum, romantic myths are sometimes told about Arabian horses that give them near-divine characteristics.

The Arabian Horse Association registers purebred horses with the coat colors bay, gray, chestnut, black, and roan. Bay, gray and chestnut are the most common; black is less common. The classic roan gene does not appear to exist in Arabians; rather, Arabians registered by breeders as "roan" are usually expressing rabicano or, sometimes, sabino patterns with roan features. All Arabians, no matter their coat color, have black skin, except under white markings. Black skin provided protection from the intense desert sun. 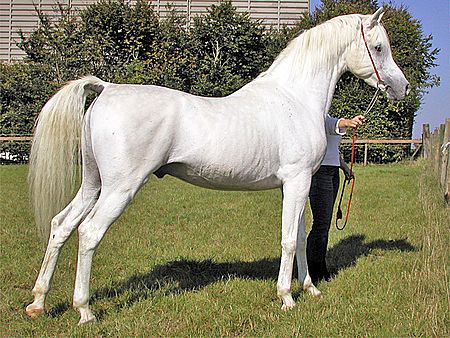 Although many Arabians appear to have a "white" hair coat, they are not genetically "white". This color is usually created by the natural action of the gray gene, and virtually all white-looking Arabians are actually grays. A specialized colorization seen in some older gray Arabians is the so-called "bloody-shoulder", which is a particular type of "flea-bitten" gray with localized aggregations of pigment on the shoulder.

There are a very few Arabians registered as "white" having a white coat, pink skin and dark eyes from birth. These animals are believed to manifest a new form of dominant white, a result of a nonsense mutation in DNA tracing to a single stallion foaled in 1996. This horse was originally thought to be a sabino, but actually was found to have a new form of dominant white mutation, now labeled W3. It is possible that white mutations have occurred in Arabians in the past or that mutations other than W3 exist but have not been verified by genetic testing.

One spotting pattern, sabino, does exist in purebred Arabians. Sabino coloring is characterized by white markings such as "high white" above the knees and hocks, irregular spotting on the legs, belly and face, white markings that extend beyond the eyes or under the chin and jaw, and sometimes lacy or roaned edges.

The genetic mechanism that produces sabino patterning in Arabians is undetermined, and more than one gene may be involved. Studies at the University of California, Davis indicate that Arabians do not appear to carry the autosomal dominant gene "SB1" or sabino 1, that often produces bold spotting and some completely white horses in other breeds. The inheritance patterns observed in sabino-like Arabians also do not follow the same mode of inheritance as sabino 1. 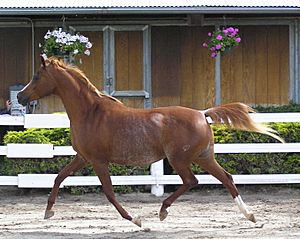 Arabians compete in many places, including horse racing, horse shows, Endurance riding, show jumping, and more. They also make good pleasure, trail, and working ranch horses for people who do not like competitive events. Arabians also are seen in movies, parades, circuses and other places where horses are used. 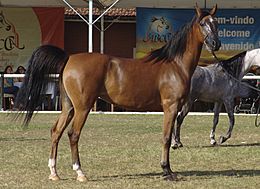 There are many legends and myths about Arabian horses. One legend says that the prophet Muhammad selected his five finest mares (female horses), called Al Khamsa ("the five") to be the foundation of the Arabian breed. Another legend says the Queen of Sheba gave an Arabian mare to King Solomon, and that is how the breed began. Yet another story says Allah made the Arabian horse from the south wind, saying, "I create thee, Oh Arabian...I give thee flight without wings."

In real history, Arabians are one of the oldest human-developed horse breeds in the world. Pictures of "Proto-Arabian" horses that looked a lot like modern Arabian horses were painted on rocks in the Arabian Peninsula as far back as 2,500 B.C. The ancestors of the Bedouin probably tamed horses not long after they tamed the camel. A horse skeleton was unearthed in the Sinai peninsula, dated to 1700 B.C., and is considered the earliest proof of the horse in Ancient Egypt. It was probably brought by the Hyksos invaders. This horse had a wedge-shaped head, large eye and small muzzle, just like the Arabian horse today.

In the desert, humans were the only source of food and water for the Arabian horse. Where there was no pasture, the Bedouin fed their horses dates, a fruit of the date palm tree, and camel's milk. Arabians needed to live on very little food, and survive a dry climate that was very hot in the day but very cold at night. Weak horses did not live, and the horses who survived the desert also had to survive being ridden for war. Therefore, the Arabian horse became very tough and able to live in a harsh world.

All content from Kiddle encyclopedia articles (including the article images and facts) can be freely used under Attribution-ShareAlike license, unless stated otherwise. Cite this article:
Arabian horse Facts for Kids. Kiddle Encyclopedia.